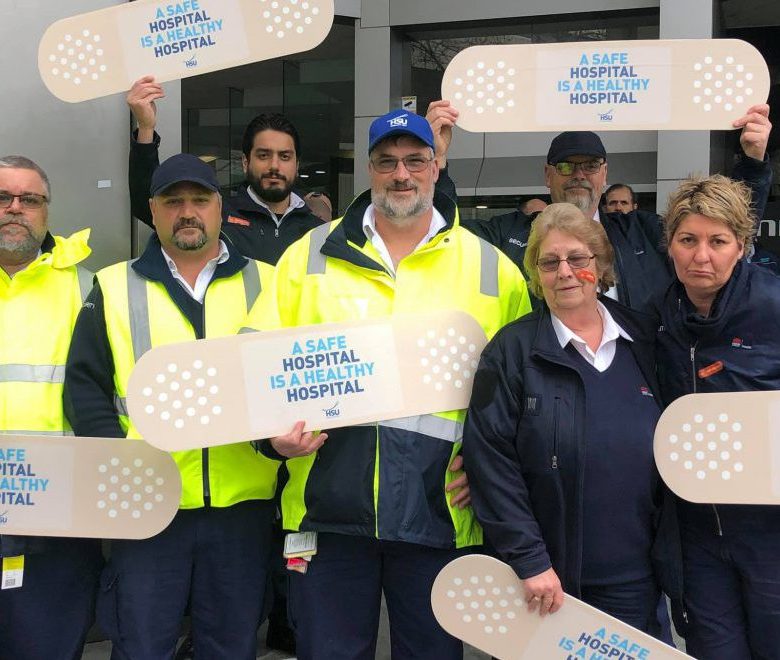 A number of four-hour strikes are set to take place across the state at the Royal Prince Alfred, Royal North Shore, Westmead Children’s, and in Wollongong, Tamworth, Wagga and Dubbo.

Workers also gathered outside the NSW Ministry of Health in St Leonards this morning.

According to the Health Services Union (HSU) NSW, more than 40 assaults take place per month against NSW hospital workers.

The union is calling on the state government to provide an extra 250 security guards across NSW as well as provide special training to safeguard workers, patients and visitors. Last month HSU members voted unanimously to take action for increased security.

HSU NSW secretary Gerard Hayes said today’s strike was the beginning of a campaign that will now intensify.

“The level of violence against hospital workers is sickening,” he said. “There are more than 40 assaults in NSW hospitals each month. In the last three years, our members have been shot, stabbed, punch, bitten and stabbed.

Speaking at the Ministry of Health this morning, Hayes said hospital workers and patients deserve better treatment than what’s currently happening at hospitals.

“Enough is enough. We are extremely proud of our members who walked off the job. These members have sacrificed pay to stand up both for their own safety and also that of the general community.

Hayes alleged the Ministry of Health propagated claims that today’s strike was off.

“The Ministry’s energy would be far better spent improving safety at hospitals and extracting funding from treasury to employ an extra 250 security officers.”