Advertisement
“Victoria’s school cleaning system is the worst of any state in the country." 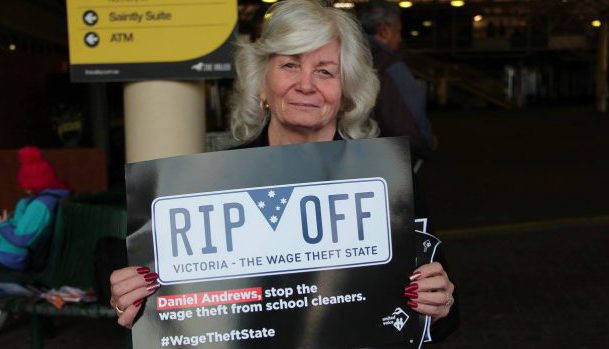 Victorian school cleaners have protested over the weekend at Labor’s state conference, demanding that the Premier put an end to “systematic wage theft” in public schools.

Cleaners joined United Voice officials and members to petition at the ALP Conference, holding banners and signs with the slogan: “Victoria – The Wage Theft State”.

“A 7-Eleven style wage theft is going on in our own state government schools,” United Voice secretary Jess Walsh said at the ALP conference.

“Hundreds of backyard operators are ripping off our hard working school cleaners.”

Walsh said “despite the fear and intimidation school cleaners face, more and more cleaners are coming forward and speaking out”.

Last week it was reported that Melbourne cleaner Kaitlin Speary had been underpaid $1000 in just under two months at one of the state’s largest public high schools.

According to Walsh, when Speary raised the issue with her employer, which is understood to hold contracts with 80 Victorian schools, Speary, “faced disgusting personal abuse and she was threatened with the sack”.

Another cleaner mentioned by Walsh was Lorraine Bird, who has been cleaning schools for almost 20 years and who Walsh said has seen backyard operators “flood” state government schools.

“[Lorraine’s] seen off the book cleaners, cash payments, pyramid sub-contracting by fly-by-night operators, and all in our state government’s backyard.”

The protest follows the release of United Voice’s survey earlier this month Wage Theft in Victorian Government Schools that found 81 per cent of school cleaners are being paid below award wages. One cleaner was found to have been paid just $2.63 per hour cash in hand for her first week of work.

According to the survey, 32 per cent are not being paid for all of their work and nearly one in five workers were working at schools under sham contracting arrangements, employed on ABNs and denied such basic entitlements as sick leave, annual leave and superannuation.

“Victoria’s school cleaning system is the worst of any state in the country. Today, there are over 1750 different school cleaning contracts and more than 700 backyard operators competing for them,” Walsh said.

“The way the school cleaning system works is that contracts are given out to the companies that can get away with paying the cleaners the least, for the longest, without detection.”

The survey, which was conducted across 142 schools, found 72 per cent of cleaners were born overseas and that many had minimal English and did not know what they were entitled to be paid. 28 per cent were on temporary visas and 17 per cent are international students.

Almost 7 per cent of the cleaners surveyed also did not have a Working With Children Check (WWCC), or did not know what it was or wouldn’t answer the question.

Under Department of Education & Training rules, cleaning contractors are required to ensure all staff have undergone WWCC. Contractors must sign a form agreeing to comply with this requirement, however this is not being enforced.

Last week the Victoria Department of Education and Training severed its ties with Ramos Cleaning Services following an investigation into wage theft.

The Department confirmed to INCLEAN it had terminated the contract this month, which was understood to include 18 public schools across Melbourne including Brunswick Secondary College, St Albans Secondary, Belle Vue Primary and Sydenham-Hillside Primary School.

Ramos Cleaning Services was reportedly facing an investigation following claims of “massive wage theft” in February this year, after Fairfax Media revealed pay slips, time sheets and workplace agreements from the company undercut minimum pay and conditions for cleaners by “as much as $100 a week”.

Fairfax also reported employees were missing out on “$5000 a year because they are being denied penalty rates and other entitlements”.

The owner of a Melbourne-based cleaning company in Melbourne who asked not to be named, told INCLEAN non-compliance in Victorian school cleaning contracts has “been an issue for a very long time”, claiming some cleaning businesses with school contracts had not been audited “for more than five years”.

“The Department has dropped the ball; they seem to have very few staff to keep an eye on cleaning contractors, so dishonest contractors have taken advantage.”

Meanwhile United Voice is reportedly investigating another Melbourne-based cleaning company, Ramzy Cleaning, which is understood to have cleaning contracts with as many as 50 Victorian schools, since March.

The union told the ABC workers were being underpaid by more than $14,000 a year through a complicated network of sub-contractors and “sham ABNs”.

One thought on “School cleaners protest in Melbourne  ”