Advertisement
Staples Inc has agreed to buy Office Depot Inc for US$6.3 billion, taking what is said to be a major step towards consolidating the (US) office supplies segment. 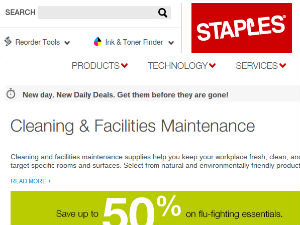 Staples Inc has agreed to buy Office Depot Inc for US$6.3 billion, taking what is said to be a major step towards consolidating the (US) office supplies segment. A 2 February report by Chelsey Dulaney of MarketWatch (Wall Street Journal) said the deal involves Office Depot shareholders swapping each of their shares for US$7.25 in cash and 0.2188 Staples shares.

Together, the two companies have about 4,000 stores and projected annual sales of more than US$39 billion.

“A combination of the two likely would get a close look from antitrust regulators, who in 1997 sued successfully to block the same proposed merger, bankers and analysts have said,” noted Dulaney.

“But some analysts say the retail landscape has changed sufficiently since then, citing the rise of online retailers like Amazon.com Inc. and increased competition from big-box chains like Wal-Mart Stores Inc. and Target Corp., which all sell office supplies now, too,” she added.

Staples had been in talks to buy Office Depot since last September and expects the deal to close by year’s end. Staples sees the deal resulting in about US$1 billion in synergies by the third full year after closing from cuts in head count, general and administrative expenses, and supply chain costs.

“Meanwhile, both companies have been closing US stores and shifting others to smaller formats, while pushing their online offerings,” Dulaney observed.