Advertisement
With growth coming principally from hardware and industrial/commercial customers, parent company GUD Holdings was able to report that its Oates business achieved a 5 percent sales increase over the 2015 financial year. 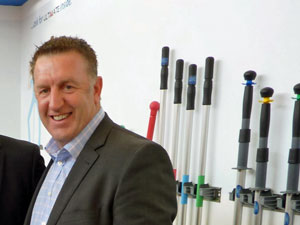 With growth coming principally from hardware and industrial/commercial customers, parent company GUD Holdings was able to report that its Oates business achieved a 5 percent sales increase over the 2015 financial year.

Oates’ underlying earnings before interest and tax (EBIT) increased 3% to $11.5 million, according to the just released GUD full year report to the ASX.

Similar to all other GUD businesses, Oates reported a stronger sales result in the second half. Sales improved 5 percent over the year and 7 percent in the last six months. The growth came principally from hardware and industrial/commercial customers.

‘Underlying EBIT increased 3 percent over the year and showed a strong recovery in the second half (up 12 percent compared to the pcp) following a 5 percent decline in the first six months.

‘This reversal in profit trend stemmed from the sales growth in addition to the consequences of active product cost management and price increases to offset the effects of the declining Australian dollar.

‘Oates effectively maintained its EBIT/sales margin at 16.4 percent compared with 16.6 percent in the prior year,’ noted the GUD report.

GUD Holdings announced a reported net profit after tax and non-controlling interests of $33.2 million, up 88 percent compared to $17.7 million recorded in the prior year.

This result included $1.6 million post-tax of transaction costs and $2.0 million representing Jarden’s minority interest in the Sunbeam business. The prior period included $13.3 million in restructuring costs after tax.

The underlying profit after tax was up 19 percent to $36.9 million. Record sales of $612 million were recorded, a growth of 3 percent over FY14. In the second half revenue was up 7 percent on the previous corresponding period with all businesses contributing.

Underlying earnings before interest and tax (EBIT) increased by 20 percent to $58.9 million, which was at the upper end of the guidance range of $55 to $60 million. The result reflected the benefits of the profit improvement plans that had been put in place in the previous year.

A final dividend of 22 cents per share fully franked was declared, payable on 3rd September 2015, bringing the total year’s dividend to 42 cents per share, an increase of 17 percent on the prior year.