Advertisement
The late Gerry Goldberg of Pall Mall has been honoured as the first name on the NCSA 'Legends of Cleaning' honour roll during an industry dinner held on 3 September by the National Cleaning Suppliers Association (NCSA) at ANZ Olympic Stadium, Sydney. 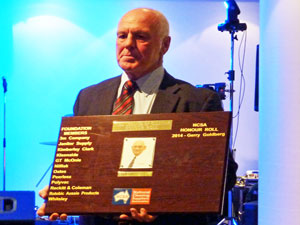 The late Gerry Goldberg of Pall Mall has been honoured as the first name on the NCSA ‘Legends of Cleaning’ honour roll during an industry dinner held on 3 September by the  National Cleaning Suppliers Association (NCSA) at ANZ Olympic Stadium, Sydney.

NCSA national president, Stuart Nicol, saw the evening as a milestone in the NCSA’s 40 year history. “The roll was conceived to not only acknowledge the legends of the past, but also to provide encouragement to the new breed of entrepreneurs and managers and alert them to the potential of our multi-million dollar industry,” he said. “Individual success stories abound with many people starting a business with minimal capital and went on to build major national companies with multi-million dollar turnovers.”

“Epitomising such success is the life and contribution to our industry of the late Gerry Goldberg, managing director of Pall Mall Manufacturing. From very humble beginnings, he took on one of America’s largest manufacturers of floor pads, which had the lion’s share of the Australian market. Not only did he beat them at their own game, Pall Mall went on to topple the giant to become the leading supplier across the country,” Nicol shared.

“Gerry’s major contribution to the industry was his passionate advocacy for training and professional development… a focus NCSA will pursue in the future in recognition of his involvement as association president for many years.”

The NCSA proudly acknowledged Goldberg’s contribution to the industry – commercially, professionally and personally by placing him as the first ‘Legend of Cleaning’ on the honour roll.

In a further tribute, the NCSA and Goldberg family are jointly sponsoring The Gerry Goldberg Industry Achievers Award – a perpetual prize designed to recognise those individuals who substantially contribute to the future of the industry. “I hope this award will in some small way make people remember him and what he did for our industry,” shared Errol Goldberg. “It is a great way to keep his memory alive and I know dad would be happy that this award will be given to someone achieving great things in the industry he loved and to which he devoted so much of his time.”

For all photos from the evening visit www.picasaweb.google.com/incleanmag