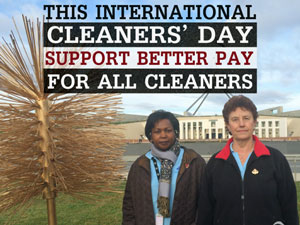 Cleaners across Australia awarded Treasurer Joe Hockey the 2015 Golden Toilet Brush Award as Parliament House cleaners began a 24 hour strike. The uncoveted and ignoble gong of shame is bestowed by cleaners on the person, company or organisation that has done least to promote the wellbeing of cleaners in the previous year, noted a United Voice press statement.

Jo-anne Schofield, national president of United Voice, said, “Mr Hockey has offended hard working Australians. He is telling them to earn ‘good money’ while actively cutting the wages of government cleaners and freezing the wages of Parliament House cleaners.

“This was a closely fought contest between Mr Abbott and Mr Hockey, but despite Mr Abbott’s huge failure to support cleaners, Mr Hockey has offended too many people too often in recent months.

“United Voice hopes that this Golden Toilet Brush will help Mr Hockey and flush some of his recent problems away.

“Today the Prime Minister and Treasurer have a chance to deliver for cleaners rather than using cleaners as political fodder.

“The Government’s decision to scrap the Commonwealth Cleaning Services Guidelines has had a devastating impact on cleaners’ lives.

“Their wages are being cut by an average of $6,837 a year but their workloads are increasing.

The Award was announced on the 25th International Cleaners’ Day at a breakfast held on the lawns of Parliament House in Canberra.