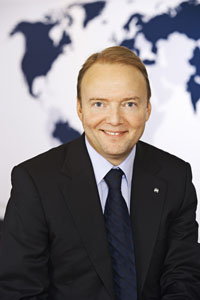 Organic growth in emerging markets has helped ISS Group to deliver a solid result for the first nine months, according to the company’s just released third quarter 2013 financial results. Organic growth reached 4 percent year to date, up from 1.7 percent in the same 2012 period.

Operating profit before other items amounted to AUD$600 million (DKK 3,097 million) compared with 2012’s AUD$615 million (DKK 3,176 million) in the first nine months of 2013 and was negatively impacted by both divestments and currency effects. The negative effect from the divestment of the pest control activities in 12 developed markets reduced the operating profit before other items by AUD$11.2 million (DKK 58 million) or the operating margin by 21 bps for the third quarter compared with the same period in 2012.

“Margin for the quarter was as expected and on a comparable basis slightly above the same period last year. We continue to grow organically in both developed and emerging markets supported by the successful implementation of large contracts like Barclays, Novartis and Citibank. In the third quarter we have won significant new contracts with Nordea Bank, Vattenfall and São Paulo International Airport. We continue executing our strategy.”

ISS’s emerging markets comprise Asia, Eastern Europe, Latin America, Israel, South Africa and Turkey, where it has more than half of its employees, delivered organic growth of 11 percent and represent 23 percent of total revenue for the Group. In addition to significantly increasing the Group’s organic growth, the emerging markets delivered an operating margin of 6.0 percent in the first nine months of 2013.

‘The outlook for 2013 is based on a mixed global macroeconomic outlook with continued strong growth in emerging markets combined with weak growth and difficult macroeconomic conditions in large parts of Europe, including the uncertainty surrounding current and future austerity measures.

‘In 2013, we had a solid start following the wins of several large IFS contracts in 2012. The organic growth in Q4 is expected to be lower than previous quarters as most of our large IFS contracts were operational in Q4 2012. Combined with the underlying business development, we expect to realise above 3 percent organic growth in 2013,’ stated the ISS quarterly report.