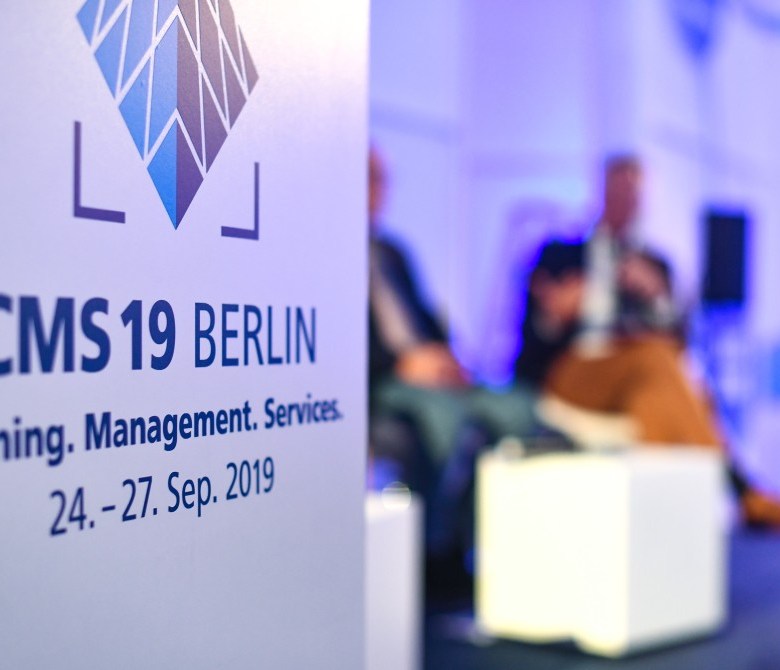 Taking as its slogan ‘Inject Innovation’, the CMS World Summit examined future technologies and business prospects in the cleaning industry.

Over the course of the speeches it emerged that the challenge of convincing cleaning industry employees to accept technological change is almost as great as the nature of change itself.

It was noted that network and standardisation structures, which were far from perfect, as well as data protection also played an important role.

“Digitalisation is a means to an end, it is not the solution.”

That was how Peter Schaar, formerly the Federal Commissioner for Data Protection, characterised the main theme at this year’s CMS World Summit.

In effect, all the speakers and the participants in the debate were unanimous that new technologies, including AI, did not aim to replace human beings, and certainly not in the face of the latest demographic developments.

On the contrary, managers still had to lay down targets, and employees with operational responsibilities had to be trained to monitor the Internet of Things and robots.

Developers had come a long way already and also faced big challenges ahead, for instance that of creating interfaces between different environments where cleaning tasks would be carried out autonomously.

This is similar to the digitalisation method of Building Information Modelling (BIM) currently used in the construction industry.

“Only humans have a view of the bigger picture,”said Berlin.

Data needed to reference other data. In the context of the cleaning industry that meant one had to create a digital twin of those buildings requiring cleaning as well as other peripheral data, in order to better analyse the obstacles that autonomous machinery and processes had to face. ”

In the end one has to respect physical reality.”

However, if one makes an effort it is possible to adjust reality to digital requirements. Frank Schröder, Facility Management head at Phoenix Contact Electronics GmbH, proved this was possible, his example being the production and admin building of his company in eastern Westphalia.

He is able to monitor who occupies the sofa in the conference area, the functioning of the coffee machine and air-conditioning pump, trigger an alert for when a service is required, and oversee energy consumption. At Phoenix Contact the floor cleaning machine takes the lift on its own to begin work in another area. The works council had no objections, he said.

Do not underestimate employees’ skills

”Cleaning is a process“, said vice head of Kärcher Markus Asch in his role as president of the European Cleaning Machine Association (EUnited).

He also emphasised the economic aspect: ”Nothing is sustainable unless it also makes economic sense.“ He also cautioned to not ”underestimate employees’ skills.” Simply complaining about personnel costs helped nobody.

It was necessary to generate enthusiasm for the digital transformation among employees, was the suggestion of Axel Korge, who is responsible for work in the future in the field of interconnected production systems at the Fraunhofer Institute for Industrial Engineering.

This would “remain their task”, he said to the audience. Furthermore, it was necessary to dispel the illusion that increasingly powerful computers automatically resulted in greater productivity. Every statistic showed that while computer performance had grown exponentially, productivity increases were only marginal.

Considerable diversity is an advantage

The elephant in the room was the question as to whether employees had the necessary cultural and educational background to want to or be able to participate in the digital transformation.

The necessary groundwork needed to take place in schools. In general, pupils had a positive attitude towards being a part of the digital transformation.

Oliver Tian, formerly president of the Singapore Industrial Automation Association, indirectly addressed this issue by noting that almost every company had considerable diversity, which was an advantage.

The objective was to crystallise common values and goals and pursue them. Peter Hug, managing director of EUnited Cleaning, pointed to another advantage that the cleaning sector had over industry, faced with the imminent transition of the possession-based economy to the sharing economy: “We already know how to monetarise services.“

Almost all the speakers emphasised that being part of the digital transformation was fun too. Nowadays, everyone was capable of operating a smartphone. Now it was imperative to accept various levels of responsibility.

It was necessary to convince people that digital media helped to bring about solutions, instead of fanning fears that they might no longer be required, said Tian.