Advertisement
The Federal Court is about to be called on to hear a landmark case on the legitimacy of AWA-style Individual Flexible Agreements (IFAs) in the workplace, stated a 30 March United Voice press release. United Voice (formerly the LHMU), is taking the Spotless Group to the Federal Court and Fair Work Australia over its IFAs. […] 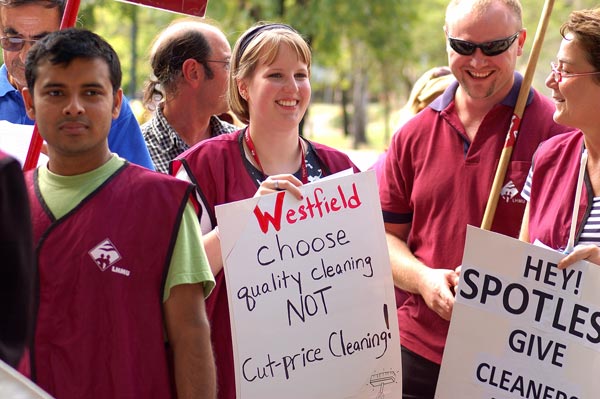 Late March United Voice cleaner members demonstrated in Melbourne CBD in support of what the Union describes as a ‘landmark’ industrial relations case.

The Federal Court is about to be called on to hear a landmark case on the legitimacy of AWA-style Individual Flexible Agreements (IFAs) in the workplace, stated a 30 March United Voice press release.

United Voice (formerly the LHMU), is taking the Spotless Group to the Federal Court and Fair Work Australia over its IFAs. ‘An IFA between a worker and an employer can vary the industry award for individual employees but only on the condition that worker is better off than under the award,’ explained the Union.

‘Further, that the variation is carefully tailored to meet the individual personal circumstances of the worker – for example to permit the employee to adjust working hours to meet family obligations like children’s sport and child care.’

National secretary of United Voice, Louise Tarrant, said the union will argue that Spotless is in breach of the Fair Work Act as its cleaners are being left worse off.

Also, the Union believes that the company is misrepresenting the IFAs to its workers. ‘Spotless use of IFAs in these circumstances is contrary to the spirit and intent of the Individual Flexibility provisions under the Fair Work Act. They are an attempt to introduce WorkChoices AWAs by the back door.’

According to United Voice, Spotless has begun rolling out ‘boiler plate’ IFAs in Victoria, New South Wales and South Australia.

The union will tell Fair Work Australia and the Federal Court that cleaners have reported that they have been unduly pressured into signing the agreements. If they refused to sign them they were warned that their hours would be cut or that they would be refused overtime hours which they have enjoyed under the Cleaning Services Award.

Tarrant said that, “United Voice had been forced to take this unprecedented legal action to try and stop Spotless from engaging in these bully-boy tactics.

“There has been no consultation or discussion with workers. Cleaners, many of whom are from non-English speaking backgrounds, have been marched in and told to sign the IFAs or they will never be given overtime again.

“Full-time shopping centre cleaners earn only around $32,000 before tax and now Spotless is telling some cleaners that if they don‟t sign the IFAs, they will lose the overtime that they desperately need to survive.

“One United Voice member, who initially refused to sign the individual workplace agreement, soon lost her Sunday shift worth $200. She has now signed the IFA due to the increased financial burden placed on her.

“We‟ve met with Spotless to demand that they withdraw the IFAs but they have refused. We therefore have no other option but to take this matter to the courts as we believe they are a clear breach of the Fair Work Act,” Tarrant said.

The Australian Government has singled out the contract cleaning industry as having a history of underpayment, exploitation and unsafe work practices.

‘If Spotless is shown to be flouting the legislation they would fall foul of the Commonwealth’s Fair Work Principles and United Voice cleaners will expect the government to take into account the Federal Court’s decision when awarding future contracts,’ concluded the release.