Advertisement
An estimated 150,000 people marched across the country. 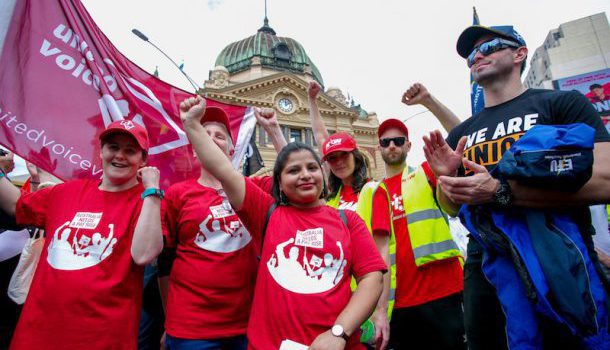 Cleaners were among the tens of thousands of workers who marched in the Change the Rules protest rallies across Australia, demanding better working conditions and pay rises on Tuesday 23 October.

The Australian Council of Trade Unions (ACTU) estimates 150,000 people rallied in Melbourne, with thousands of others marching in Sydney, Darwin, Wollongong, Cairns, Townsville and other regional centres.

United Voice delegate Sajita Sitaula Aryal, who has worked as a cleaner for five years, was among the protesters in Melbourne.

She told The Age her hourly wage has increased by only $3 to $23.24 in the last five years, making it difficult to keep up with the cost of rent and bills.

“The minimum wage is not keeping up with the cost of living,” she said. “It is really difficult. You can’t afford to pay rent on those wages and save any money for a deposit to try to buy a house.

“We need a pay rise that keeps up with cost of living. Inequality is at a seventy-year high. That’s why we need to change the rules.”

Both rallies in Melbourne and Sydney caused disruptions to public transport and closed a number of roads in both CBDs.

“Change the Rules protest rallies are happening across the country, and every single person attending one is doing something important and courageous for our country’s future,” said an ACTU spokesperson.