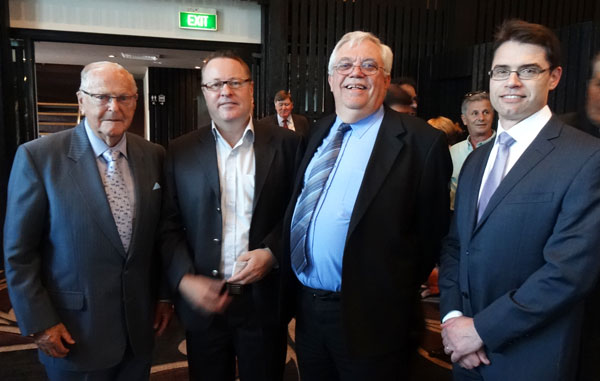 “This function has taken over as the number one in our industry, it’s an important day because all executives and company owners have to shout your cleaners a drink and a good meal because in the end they make our business, and they make our industry what it is,”  said Corby.

“It’s wonderful to see you all here and the day is made even more special as we have guest speaker, Ian Kiernan from Clean Up Auatralia, and in my opinion he has inadvertently done more for our industry than just about any other single person because he has made people think about cleaning.”

Corby thanked the event’s platinum sponsors – AustralianSuper, Hako Australia, Agar Cleaning Systems and Lennox Institute. Special mention was given to attendee Reg Whiteley, founder of Whiteley Chemicals. “Whiteley Chemicals has been a part of this industry for a long time and is a much-loved supplier, and Reg is the brains and pioneer behind it all,” praised Corby.

“The BSCAA represent everyone in the room including the cleaners, because we want the industry to be better, we fight every day to improve it and as it improves it flows down to the people who do the vacuuming and dusting,” Corby shared. “We are part of a great industry and I still believe we are the best at what we do, so please eat, drink and enjoy.”

Guest speaker Ian Kiernan spoke about Clean Up Australia’s history and how the campaign first started with an ‘average bloke’ wanting to make a difference. He changed his career from a builder to an environmentalist and founded the nation’s largest community-based environmental event – Clean Up Australia Day.

After the individual cleaners awards, supervisor and security awards were presented, the three main awards of the event kicked off with the Lennox Innovation Through People award presented by Paul Morrall, general manager of m-Learning at Lennox Institute. “It was really hard to pick a winner this year,” stated Morrall. “The company that was chosen had the ability to recognise the need for change and understood it, and then most importantly, implemented a strategy to make it happen.”

“The company was growing and they didn’t want to dilute the corporate culture so a team was formed to implement a new strategic program. And this program saw their training footprint increase which resulted in people connecting more to the company,” Morrall revealed. The winner of the Lennox Innovation Through People award was the Knowledge Management Team from Assetlink Services.

Steve Agar from Agar Cleaning Systems then presented the Agar Company award. “The larger companies tend to have the recourses to drive innovation and implement systems that smaller companies can only dream of,” he stated. “But this award is about how individual companies can demonstrate how they have improved their own processes and methods and then carry that through to demonstrate how it has improved their performance at a competitive level. So on that basis, any company can win.” The winner of the Agar Company award was Cleancorp (NSW).

The final award was the Hako Young Manager of the Year award presented by Frank Cupido of Hako Australia, for which the winner would receive a sponsored trip to the WFBSC 2014 being held in New York. “This year was one of the toughest years to select an award winner, and I want to thank all the managers and supervisors for nominating their managers, as a lot of time and effort when into the submissions,” shared Cupido. “As an industry, I believe we care about our people and the high quality of this years’ submissions was testament to that.” The winner of the Young Manager of the Year award was Hailey Marks from Guardian Health Support Services.