Advertisement
Fred Palombi is slowly removing more than a century’s worth of grime from the floor in Boulder, Colorado’s historic Post Office to reveal dazzling white tile and pink marble. 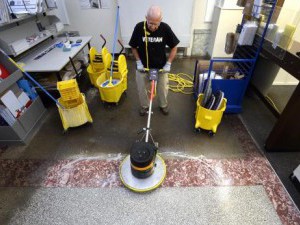 Fred Palombi couldn’t stand the sight of the grubby, brown-stained floors in Boulder, Colorado’s historic Post Office anymore, so he decided to do something about it.

Over the past month or so, the 66-year old custodian has laboured to remove a century of dirt and reveal the colours that most people didn’t even realise were there: an elegant mix of white terrazzo tile and pink marble.

“I always knew what the floors looked like and I never agreed with the maintenance manager that they should be like that. I had no ability to change it, though,” he said in an article in Times Call. “Once I got over here, I really took it upon myself.”

At first he only cleaned the foyer ‘just to prove to his boss, Postmaster Nancy Solano, that it could be done.’

“He took the initiative and I’ve just kind of let him roll with it,” Solano said.

Now Palombi is slowly clearing off the rest of the first floor, doing the work ‘almost every morning, starting sometimes as early as 4 a.m.’ With 34 hours of labour completed, he has ‘another three or four months of work left,’ which will include polishing the cleaned floors.

In addition, the custodian said he plans to clean and polish all the building’s baseboards, plus the brass panels on every door, by the time he retires in December 2016.

“I think he has an amazing idea,” said custodian Patricia Alvarez, a colleague on the maintenance staff for seven years and now an on-and-off aide in the floor project. “I actually thought that what he was doing was impossible.”

Customers, evidently, also thought so. Palombi said that people have voiced their surprise before applauding his work and giving him “fist bumps.”

But Palombi said he isn’t doing the restoration for accolades. “It’s a historic building and I’d just like to see it restored as best I’m capable,” he said. “I get a lot of satisfaction from seeing what I’ve done – from that dark floor to that nice pink and white. It makes me feel good to see the improvement.”