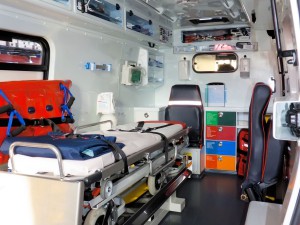 Image courtesy of njaj at freedigitalphotos.net

Steve Martin, a research engineer NIOSH, explained in a Charleston Gazette-Mail article that the agency is currently looking at ‘three different methods using UV-C light,’ which is ‘potentially better at reaching germs that are sometimes missed by traditional cleaning methods.’

‘According to Martin, the goal of the project is not to promote the UV-light method over other cleaning methods, but to develop a way of quickly and safely disinfecting emergency vehicles in the event of a pandemic or other communicable disease outbreak.’

“When we conceived this project, we were looking at it purely from a disease pandemic standpoint, so it would be for when things get really bad. We’re in no way saying that what we’re doing is ready for primetime to replace more conventional cleaning methods in typical day-to-day operations,” he said. “There’s a lot of research right now in terminal cleaning of hospital rooms with UV systems because of the increasing cases of hospital-acquired infections … and a lot of those studies are finding reasonably good results.”

“The same infections hospitals are dealing with are also problems in ambulances,” Martin continued. “You can have patients with [c. difficile] infections, or MRSA infections — types of things you don’t want to transmit from one patient to the next, so it could be useful there, as well.”

One of the methods NIOSH is exploring simply involves mounting a UV lamp on some sort of tripod. ‘This method would require the vehicle to be stationary and likely plugged into an external power source.’

For the second method, researchers are creating a system of UV lights mounted inside the ambulance. The third experiment involves having a UV-light-emitting robot rove the vehicle.

All three methods are still being tested, Martin said.

“We’ve done a lot of testing with them, just measuring the amount of UV hitting various surfaces,” he explained. “Now we’re in the phase where we’re coating small metal coupons with real surrogate micro-organisms and distributing those through the ambulance in hard-to-reach areas so that we can measure a real microbial kill. Once that’s done, I think we’ll be at the point where we’ve at least proven that the concept works, and then we’ll move forward from there.”

‘The UV light system does have couple of drawbacks, Martin admitted. UV-C light can hurt the eyes, so no one can be inside the back of an ambulance while it is being disinfected, and the UV light cannot penetrate bodily fluids, so things like blood must be thoroughly cleaned up by hand prior to using a UV system.

‘Ultimately, Martin said he hopes the systems will be “another tool in the toolbox” for first responders.’