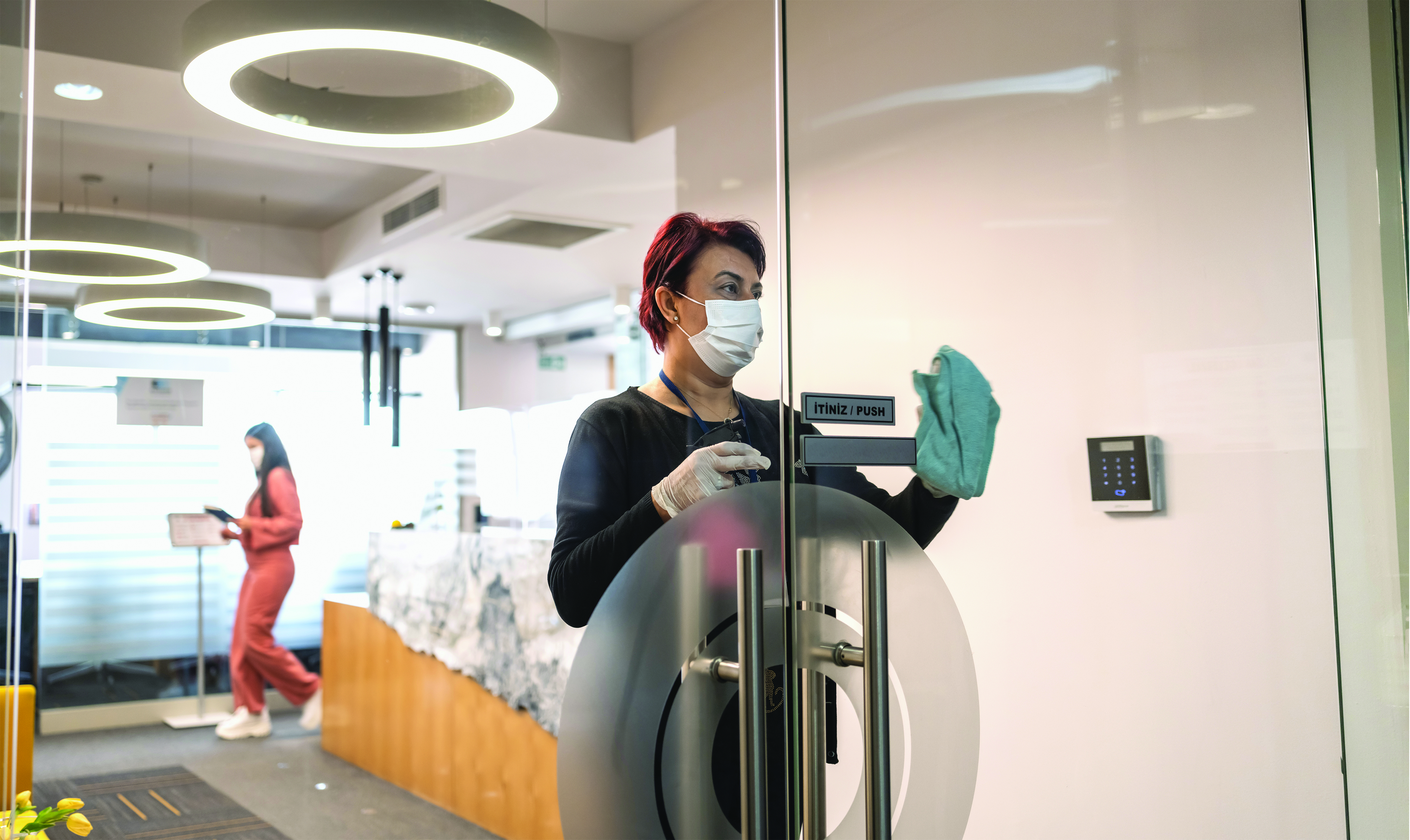 A perfect storm of events is causing a labour shortage for cleaning contractors and facility managers in New Zealand, putting industry leaders on notice to rethink their recruitment and training efforts.

Low unemployment and the loss of many skilled migrants and international student workers because of COVID-19 border closures is at the heart of the issue.

Fewer numbers of Pacific Islander workers is also hurting the agricultural and cleaning sectors, while a new brain drain to Australia is a throwback to the period around the global financial crisis in 2008.

“It’s a very tough labour market and everyone is competing in the same very small pot for the same people,” says André Reynolds, founder of Grow@, an app that connects cleaning, security and other workers to employers.

This reality underlines the importance for businesses of fine-tuning recruitment, retention and training strategies to woo talent and create stronger career paths for workers.

New Zealand’s jobless rate fell to a record low of 3.2 per cent in the fourth quarter, the lowest since records began in 1986, according to Statistics New Zealand data released in February. That leaves a shallow worker pool.

Worryingly, in the year before the pandemic, 239,000 non-Kiwis came into the country on temporary work visas, compared with just 5700 in the past year.

Lauren Micallef, Oceania Manager for ISSA, says the scenario underlines the importance of fostering a great culture to recruit and retain talent.

All players in the sector – from cleaners and manufacturers to wholesalers and distributors – should be offering training opportunities, while also embracing factors such as environmental and social governance (ESG) principles as part of being an employer of choice.

“There’s a lot of jobs on offer at the moment, but not as many people to fill those positions,” she says.

“Therefore, it means you have to start looking at the culture of your company, issues such as ESG and how you’re going to support staff.”

In addition to creating better businesses and morale, Micallef says reporting to government on ESG performance is increasingly being required, while such principles are now often part and parcel of tenders and contracts.

“It’s an area you don’t want to be behind on and it should form part of companies’ training and certification programs.”

Even if the pandemic ends and New Zealand borders open permanently, Reynolds expects the labour crisis to continue indefinitely.

“I think it’s a problem that will compound further. Once global borders reopen, a lot of people in our country will want to travel to see family and friends, especially our large Pacific Island workforce. When they decide to go back home, they probably won’t go for a couple of weeks, they’ll go for months. That will have a huge impact on labour.”

Getting a recruitment edge

On the recruitment front, innovation may well be a point of difference for some.

Based in Auckland, Reynolds has developed the Grow@ app to provide a different way to connect cleaning, security and other workers to employers based on location, time available and their wage rate.

Reynolds’ belief is that many experienced cleaners who will not even consider applying for a job that requires a written application with components such as a cover letter and a CV that has to then be emailed to prospective employers.

Even though they may be good cleaners, they often speak English as a second language, have poor access to computers and lack confidence in their writing skills.

“For most cleaners, that’s a huge step, so as an industry we’re effectively putting massive barriers in front of people,” Reynolds says.

Using social media and traditional platforms, the aim with Grow@ is to alert cleaners to potential work and quickly connect them with employers. Bosses can also use the app to flag urgent jobs with existing workers.

“We’re attracting a very different type of person – someone who wants to know about opportunities, and then when an opportunity comes up we’re able to directly contact those people to see if they’re still interested. It’s a very new way,” Reynolds says.

With a 20-year corporate career as an HR professional in the facilities services and hospitality industries, he believes apps such as Grow@ are just part of the recruitment solution, along with a commitment to a better training that can upskill workers.

A survey last year by international consulting company McKinsey found that almost two-thirds of US-based employees said that COVID-19 has caused them to reflect on their purpose in life, while almost half have been re-evaluating the kind of work they do.

As an industry that can point to its critical hygiene and health role during the pandemic, the cleaning industry may have an opportunity to attract a new cohort of workers who want to get greater work satisfaction and contribute to communities.

Nevertheless, according to Kathryn Groening, education and training consultant at ISSA, businesses need to get their talent-management strategy and culture right so that workers feel wanted and aligned with their employer.

She says the current industry buzz is around employers having clarity of vision, insisting on better behaviours, creating teams that make a difference, and being candid but respectful.

“Cleaning is an industry that at times could do better in areas such as behaviour and culture,” Groening says.

This year and beyond, businesses should be seeking to re-evaluate processes and tools and re-invent the way they operate to build greater levels of resilience and employee support.

There is also likely to be greater focus on how AI, through technology such as robotics, will drive greater levels of employee safety, security and productivity.

ISSA is well known for the standards and certification programs it offers, including in areas such as institutional and commercial cleaning, schools, industry management and biohazard solutions.

Groening has no doubt that better training contributes to safer, healthier, happier staff who deliver greater productivity and profitability.

In modern cleaning and facility management operations, that training must cover entry-level positions through to middle and senior management, while product, safety, hygiene and other specialty skills should also be part of the mix.

To that end, the ISSA’s CIMS Certification Experts (CCE) course arms people with information about the critical factors that can be used to help customers or their own organisation meet the highest possible levels and be certified to the Cleaning Industry Management Standard (CIMS).

That could include everything from operational and budgetary knowledge to the evaluation and redeployment of the workforce.

The other key factor, adds Groening, is the education of the end user of cleaning products and services at a time when COVID-19 has upped the ante on standards.

“They often don’t understand what a proper cleaning job looks like and how a scope of works should be structured,” Groening says.

“And they don’t always understand validating best practice and getting a return on investment from it that they can then use to market their business. These are big areas where we can do better as an industry.”

Kerry Boon, sales and marketing manager at cleaning equipment and supplies business Proquip NZ, says it is also important for training to extend to customers and end users, not just your own staff. Whether it is around the proper use of machinery, or education about the latest battery technology, his team takes that training role seriously.

“We take the approach that we are educators,” he says.

“We have to learn about the products themselves and then seek to explain that in a way that customers can really understand. Anyone can sell a machine, but if you don’t provide the knowhow and education around it, there will inevitably be a scenario such as a company training five people to drive a ride-on scrubber and six months later they’re all gone. That’s when things go wrong if there is not a proper culture around training.”

Reynolds believes the cleaning industry has traditionally been “fairly lazy” about its training measures and that there is merit in paying more attention to modular training that covers skills for career development, not just cleaning skills.

“We should be training people about how to put together a CV, how to interview, and even the type of career options they might have outside of cleaning. Those things might even help retain people in cleaning because then they’re not just being treated as a low-skilled cleaner who is going to remain a cleaner. They’re being treated as someone who has a broader life plan.”

Micallef agrees that a bigger-picture view of training could be advantageous for the cleaning industry. While some cleaners may simply want a job that does not require them to sit behind a desk, others will be keen to pursue a career in which they can develop and progress.

“It’s crucial to not only provide initial training for cleaners, but to also identify those who want to go on to managerial level, and we need to work out how best to support them on that voyage.”

As New Zealand emerges from the pandemic and the cleaning industry, among others, seeks to refocus and regroup, Reynolds maintains that the industry may have to embrace an employee value proposition whereby some cleaners use the job as an entrée into the broader employment sector, picking up skills, establishing a work record and then deciding if they want to pursue a career in cleaning or “try their hand at other jobs”.

“Cleaning is not always seen as a vocation where you can grow, and it should be because there are great opportunities in cleaning. But what we can change is the perception in cleaners’ minds as to what cleaning can do for them. We should be explaining how we can help them so they can flourish and move on from cleaning after using it as a first step so they’re more attractive to other employers in the future.”

Despite challenges on the labour front in New Zealand and elsewhere, Micallef says there is great anticipation about the future of cleaning given that its status as an essential service has been highlighted during COVID-19.

“There are real opportunities and excitement about where this can go.”