Advertisement
Whiteley Corporation's managing director, Greg Whiteley has received the prestigious 'Business Leader of the Year' award at the Hunter Business Awards on Friday 8 August. Sponsored by CPA Australia, the award is a great achievement for the team at Whiteley Corporation, stated a 12 August press release. 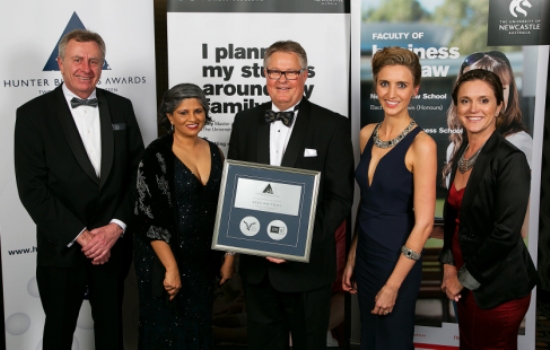 Whiteley Corporation’s managing director, Greg Whiteley has received the prestigious ‘Business Leader of the Year’ award at the Hunter Business Awards on Friday 8 August.  Sponsored by CPA Australia, the award is a great achievement for  the team at Whiteley Corporation, stated a 12 August press release.

“The award recognises Whiteley’s ongoing involvement in promoting business within the Hunter, where Whiteley Corporation will celebrate 20 years of manufacturing at Tomago next year. Greg is involved with representing many national associations at the highest level including the Australian Dental Association, ACCORD Australia, Environmental Health Australia and a number of other peak bodies, including the major USA trade associations of ISSA and CIRI (Cleaning Industry Research Institute International).”

Infection control research is an integral part of whiteley’s involvement in healthcare and in addition to his other duties, he is completing his PhD on Cleaning validation of surfaces within healthcare settings. “It is Greg’s passion to reduce the number of Healthcare Associated Infections (HAIs) and to promote good public health within the general community,” stated the release. “Whiteley has ongoing research into hand hygiene, surface hygiene, instrument cleaning, and the sterilisation of medical devices.”

“This is a great honour, and many esteemed Hunter business leaders have been prior winners. I see this award as an acknowledgement for all of our work together, as a company team, and this award is in no small part a recognition of the contribution of many, and not just of my efforts both within and outside the business,” said Whiteley.

The release goes on to mention a major achievement for the company, which was the successful launch both locally and internationally of an innovative hospital surgical instrument grade disinfectant known as ‘Rapicide-OPA’ in the US and ‘OPAL®’ in Australia last year.

“I want to thank the Hunter Business Chamber, the board and the executive team, and also the judges for their decision in my favour. I would also like to take the opportunity to thank CPA Australia for their generous sponsorship and support,” added Whiteley. “Also, a special thank you to my wife, Michelle and all of our Whiteley team, who have each played a significant part in making possible the time taken for the various activities in which I am regularly engaged on behalf of the entire company.”