Advertisement
The investment Whiteley Corporation made in its world-class Tomago (Newcastle, NSW) facility has paid off many times over with unrivalled local and export business successes; plant licensing from Therapeutic Goods Administration (TGA) and SAI Global; and valued community and ties with the Hunter region. 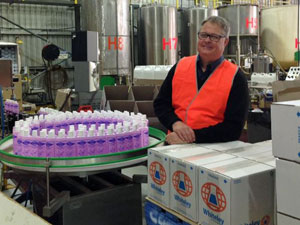 The investment Whiteley Corporation made in its world-class Tomago (Newcastle, NSW) facility has paid off many times over with unrivalled local and export business successes; plant licensing from Therapeutic Goods Administration (TGA) and SAI Global; and valued community and ties with the Hunter region.

Whiteley Corporation has a long history as one of Australia’s leading manufacturers of disinfectants for healthcare and industrial cleaning products. An Australian, family-owned company, it has served the Australian market for more than 82 years – the past 20 years from its Tomago facility.

In 1995, Whiteley Corporation transferred its manufacturing to a purpose built, world class facility at Tomago, Newcastle from its original site at Chippendale (Sydney). The company received direct funding and planning support through the NSW Department of Regional Development’s Decentralisation Grant.

“The move to Tomago has been the debut for a period of unrivalled success for the business. The company has grown from its small roots to more than 10 times its turnover since based at Chippendale in inner Sydney,” commented Whiteley Corporation’s managing director Greg Whiteley.

The Tomago manufacturing facility was officially opened by the Honourable Carl Scully (former MP) on 2nd June 1995. Also present at the official opening was founding chairman Reginald Whiteley, who still maintains an active and intimate involvement in the business.

Whiteley Corporation is now a Therapeutic Goods Administration (TGA) and SAI Global licensed plant that exports to more than 20 countries. The company is well known in the Hunter region for its successes in exporting manufactured goods.

Export has been a long term platform for business development and a motivator for innovation. “Export is good for our business and it is good for the Hunter Region,” emphasised Whiteley.

As part of its continuing expansion into research and development (R&D), Whiteley Corporation has a number of collaborative research projects with several universities and tertiary institutions, and continues to add new patents to its technology portfolio.

Whiteley Corporation has become a proud member of the Novocastrian business community and has been acknowledged with various awards and accolades over the past 10 years. Greg Whiteley was also recipient of the Hunter Business Chamber’s 2014 ‘Business Leader of the Year’.

“Our greatest achievements are the investments in community and commercial success resulting in greater investment within the Hunter Region,” noted Whiteley.

‘Looking forward, Whiteley Corporation will continue to focus on achieving high standards in manufacturing, distribution and technical support. The company remains committed to R&D and growth in the Hunter,’ said the company’s statement.