Advertisement
Under the new system eight zones have been awarded to five major contractors. 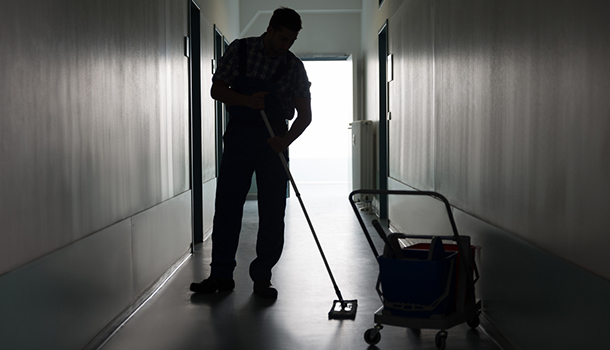 The Victorian state government’s new school cleaning reforms have taken effect, launched in a bid to stamp out dodgy contractors and worker underpayments.

The reforms were first announced by the Minister for Education James Merlino in August 2017 and took effect from 1 July 2018. The overhaul of government school cleaning contracts followed multiple investigations that found school cleaning staff were being underpaid and mistreated.

A report released by United Voice in May 2017  Wage Theft in Victorian Government Schools uncovered 81 per cent of school cleaners in Victoria were being paid below award wages. One cleaner identified in the report was found to have been paid just $2.63 per hour cash in hand for her first week of work.

The report also found 32 per cent of cleaners were not being paid for all of their work, while nearly one in five workers were working at schools under sham contracting arrangements, employed on ABNs and denied such basic entitlements as sick leave, annual leave and superannuation.

United Voice estimated  total wage theft exceeds $10 million per year across Victoria’s 4000 state school cleaners. The union labelled Victoria’s school cleaning at the time as “the worst of any state in the country” with “over 1750 different school cleaning contracts and more than 700 backyard operators competing for them”.

Under the new school cleaning reform, metropolitan Melbourne has been divided into eight separate service areas, each of which is serviced by a single cleaning contractor appointed by the Department of Education and Training. The area-based cleaning model is understood to follow similar sets up in other states including NSW.

A spokesperson for the Department of Education and Training told INCLEAN the new cleaning model is addressing the systematic underpayment of cleaning staff that was found to be occurring through multiple investigations by the department.

It is understood prior to the newly installed model the department was monitoring around 100 large contracts, with schools required to appoint contractors approved by the department’s centralised School Cleaning Panel.

Shadow Minister for Small and Medium Enterprise Neale Burgess said in May the reforms “will mean the loss of hundreds of jobs”, with many smaller cleaning operators claiming to be facing closure as a result of the reforms.

A spokesperson for the Victorian branch of the Building Service Contractors Association of Australia (BSCAA) told INCLEAN the association is trying to assist business owners where possible who had lost business under the new system.

The department spokesperson said the new contracts have “stringent compliance and reporting requirements, as well as an independent audit and assurance program”.

“The selection of cleaning contractors have been subject to an open, competitive tender process complying with Victorian government procurement standards and contractors were required to demonstrate how they would comply with legal obligations including ensuring staff receive legal wages and entitlements.

“We have selected high-quality service providers with substantial experience cleaning schools and have demonstrated that they have the systems, policies and processes in place to ensure compliance with workplace obligations.”

The department spokesperson said sub-contracting is not permitted under the cleaning reform except for the provision of services that require specialist expertise, such as high-window cleaning. The department will monitor the use of sub-contracting by service providers to ensure these requirements are met.

“The new contracts with service providers have stringent compliance and reporting requirements, as well as an independent audit and assurance program. Any evidence of non-compliant practices will be treated seriously by the department and will lead to termination of the arrangement.”

Schools in regional Victoria will continue to manage their own cleaning contracts but “from within a strengthened compliance and monitoring framework” according to the department.