Advertisement
The 'Circular Economy' is a growing movement in business around the world; the concept is based on rethinking the current 'take, make, dispose' model 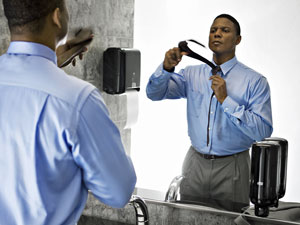 The ‘Circular Economy’ is a growing movement in business around the world; the concept is based on rethinking the current ‘take, make, dispose’ model where resources are used then sent to landfill. By recycling, repurposing or reusing instead, resources can be saved, and costs and energy reduced, points out Tork Professional Hygiene.

The principle of a Circular Economy can be applied to any industry. Starbucks, H&M, Nike, Puma and Disneyland are some of the big names incorporating this concept into their business models. H&M is encouraging customers to bring in old garments that it then turns into other products, garments or rags.

Tork Professional Hygiene is also looking at how it can support the movement. By rethinking and redesigning, Tork has reduced waste going to landfill with recyclable packaging, recyclable soap cartridges and by maximising the lifecycle of its dispensers, which are then also recyclable at the end of their lives.

Tork also recently signed on as a project partner with a new initiative of the Sustainable Business Network (SBN). The initiative is designed to minimise waste from office refurbishments and new builds by using Circular Economy principles.

More than 100,000 Tork dispensers are placed every year and often, due to washroom makeovers and building refurbishments, they are replacing dispensers that are still functioning. Tork is looking into ways to reuse or recycle these dispensers to reduce waste.

“This collaborative project created by SBN will kick start our work with the goal to offer a simple and sustainable way to take care of replaced dispensers and also provide an industry guide to architects and builders to future-proof new builds,” says Stevens.

James Griffin, network general manager at SBN, is delighted to be working with Tork on this project. “Tork will bring a new element to the project alongside the other partners Philips and Inzide,” states Griffin.

“Tork will spearhead the washroom element of the project and we look forward to working with our members and the commercial building industry to communicate how Tork is facilitating a Circular Economy in New Zealand.”

With New Zealand leading the way, the plan is to roll the program out into the Australian market. And with the Circular Economy in Australia being estimated at $26 billion by 2025, what goes around will come around for sustainable brands like Tork.