Advertisement
Those of us who are old enough to remember will recall a television show from 30 odd years ago called The Mod Squad. Its mission – to clean up crime. Well, now you can meet Melbourne business The Mop Squad whose mission is to clean up grime. Keith Watts reports It is no coincidence that […] 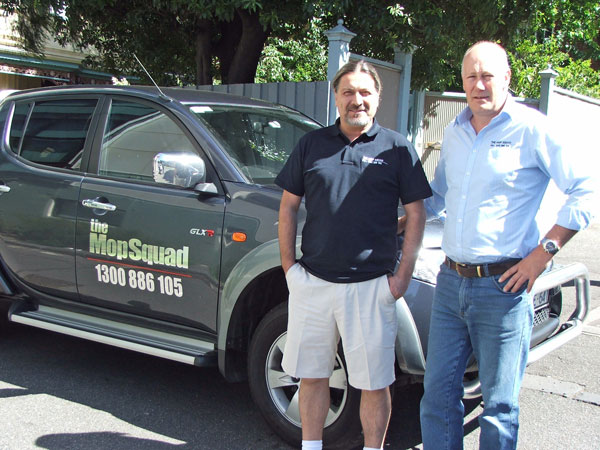 Those of us who are old enough to remember will recall a television show from 30 odd years ago called The Mod Squad. Its mission – to clean up crime. Well, now you can meet Melbourne business The Mop Squad whose mission is to clean up grime. Keith Watts reports

It is no coincidence that The Mop Squad is headed up by ex-policeman Senior Sergeant Marc Drew who realised back in 1985 that grime paid better than crime. The Mop Squad is a diverse business with multi-national and international clients throughout Melbourne’s CBD and a foothold in Sydney. It offers a full range of services with a strong focus on body corporate and commercial cleaning.

While serving with the police Drew gained industry experience by managing night shift cleaning at the annual Royal Show, Melbourne Showgrounds. He operated the cleaning business while in the police force for about six years.

In 1985 Drew made a decision to concentrate on cleaning. With a partner he entered the world of mainframe computer cleaning but after a few years the partnership dissolved and he carried on alone with his own company New Central Cleaning & Maintenance.

As that business grew and the workload increased dramatically, Drew made a decision in 2003 to take on a new partner and change the business name to something far catchier – The Mop Squad.

The new partner, Ismail Guner, was one of Drew’s regular cleaners who showed a real aptitude for the business. “Taking on Ismail was the best thing I did,” says Drew. “It took the pressure off and enabled me to develop the business. Ismail now looks after the operational side of things and I concentrate on tenders and administration.”

The Mop Squad used to advertise in the hard copy Yellow Pages but in recent years switched to the on-line version. “Initially we were listed in the Body Corporate section but we were not getting much out of it. We listened to suggestions from Yellow Pages and recently changed to the Commercial Cleaning category… with great results,” Drew explains.

“In 200 suburbs around Melbourne we are on the first page and are already doing two quotes a week from it. We are converting 80 percent of those quotes, which is very pleasing. We have also recently signed up with Tenderlink and we are getting some good quality leads from that as well.”

The Mop Squad now employs 16 full time and 12 casual staff with the important training task conducted by Drew. “I have a Certificate IV in Workplace Training and have attended a number of management and customer service courses. My experience with the police force has also helped me in dealing with difficult people and I try to pass this knowledge on to my staff so that they know how to deal with clients appropriately.”

“We put the staff through induction training and I take them out on site to see what they can do. I am compliance-driven so I make sure they are up to date with OH&S requirements. Each member of staff has their own manual with all the necessary forms for accurate reporting of incidents, spills, chemical charts etc.”

The Mop Squad team has uniforms and quality standard equipment as well as being highly aware of environmentally friendly procedures.

“We keep our staff a long time and we pay above the award. We want to keep good staff, we want continuity and so do clients,” emphasises Drew.

The Mop Squad operates a number of vehicles, which include two Ford utes; a Mitsubishi Trident dual cab; and two Nissan Patrols, one of which is set up for hot water pressure washing.

When purchasing equipment the company has a policy of sourcing from large organisations that have a good strong history of sound technology and a focus on reliability.

“We cannot afford to have equipment break down in the middle of the night, leaving the site un-cleaned the next business day,” points out operations manager Guner. “Also, we do not look for the cheapest as it is a false economy.

“With regard to chemicals we try our best to buy chemicals that will not negatively affect our staff or customers’ health,” says Guner. “If it’s safe to use then it should also be safe for the environment. Whenever possible we use steam cleaning, which negates the use of chemicals. Staff are properly trained so there are no accidents in this area either.”

The Mop Squad’s growing number of body corporate clients span metro Melbourne and generally located within a 10km radius of the CBD. Commercial clients include ARB, Adidas and a number of shire councils.

“A conscious decision has been made to target international companies,” says Drew. “Those companies can afford to pay the bills when things go wrong. During the recession in 1986/7 we were alright but lost a lot of money from clients who couldn’t pay us. We don’t want to be in that situation again.”

The Mop Squad now turns over some $2.5 million per annum, a growth of 10 percent over the last 12 months and further similar growth is expected. Drew believes that increased interest from Yellow Pages on-line advertising, Tenderlink and Sydney expansion will drive the growth.

He has parting words of advice to other cleaning companies. “Keep your client happy, no matter what. Listen to what they are saying and let them vent their emotions. Don’t argue with them but instead give them a solution to fix the problem straight away.”