Advertisement
Government News’ Julian Bajkowski posted on 18 July 2013… A new push by the City Of Sydney to get businesses to open their lavatories to the public could finally shame junk food giant McDonald’s into unlocking closed toilet facilities in its outlets in some key central locations. The inner metropolitan council has proposed a voluntary […] 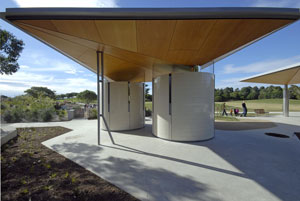 A new push by the City Of Sydney to get businesses to open their lavatories to the public could finally shame junk food giant McDonald’s into unlocking closed toilet facilities in its outlets in some key central locations.

The inner metropolitan council has proposed a voluntary scheme for “retailers, cafes and other businesses” as part of a wider public amenities strategy that would get shopkeepers to voluntarily open their toilet doors to passing pedestrians.

The issue of toilet availability in city, business and public areas is a critical one for local governments and authorities because it directly affects access for both families and older people whose needs are more urgently pressing than adults who can hold-on for longer. Confused and desperate tourists would also find some welcome relief.

While McDonald’s outlets in the Sydney CBD could once be relied upon for toilet facilities, the fast food franchise has more recently been locking-up its lavatories in some high throughput locations like the Sydney Entertainment Centre – with little or no explanation to the public why or even a notification that toilets are not available.

Now the City of Sydney is looking to ease the pressure.

In plans released this week the council said it will plumb-in 15 new public toilets ‘in city streets and parks’ alongside its proposed voluntary scheme to get businesses to help offer toilets.

It has also floated the option of having pop-up urinals in high-density nightlife areas like Kings Cross, Oxford Street and George Street where boozed-up revellers in need of an outlet routinely leave their mark on business doorways, fire-exits, trees, lanes and public and private gardens.

But the price tag for making it easier to ‘spend a penny’ isn’t small change. The cost of the proposed new toilets and upgrades is estimated at $8.26 million with $6 million of the bill accounting for new facilities and $1 million for the demolition and ‘adaptive re-use of five redundant toilet facilities’.

The progressive council’s stated vision of toiletry nirvana is to have no-one need to ‘walk more than 400 metres to find a public toilet in the city and village centres’.

The City reckons it now operates around ‘half of the local government area’s 117 public toilet facilities’. The remainder, it says, are provided by shopping centres and government agencies including transport providers like the recently rebadged Transport for Sydney.

But it’s far less clear how many commercial entities now allow people to use their toilets.

Although hygiene and vandalism are often cited as reasons for toilet lock-outs on private business premises, closures can avoid the expense of the upkeep and cleaning of toilet facilities made available to customers and the public.

Government News has contacted McDonald’s head office for comment on its toileting and hygiene policies, including lockouts, but is yet to receive a response.

That means the City will need to rely on the goodwill of business owners rather than having regulatory options up its sleeve.

Even so, the City of Sydney says its own research has found that ‘people want more toilets that are easier to find and that the most popular public toilets are in shopping centres.’

While those results are hardly surprising, the City’s director of operations, Garry Harding, nonetheless says the council is looking at implementing a trial that would get businesses to voluntarily put signs up that tell people that their toilets are available for public use – a move that would mirror similar initiatives overseas.

Some overseas cities display signs advising people their toilets are available for public use and the Harding said the City will consider a trial here.

“This strategy is designed to give visitors to Sydney more clean, easily accessible public toilets. We want to investigate whether business has a role to play in doing that,” Harding said.

“Shopping centres attract the highest number of people using public toilets, and we’d like to discuss with other businesses the issues involved in making their toilets available to the public.”

Harding said that earlier this year council relinquished a 50 cent charge on some automated public toilets “to make them more accessible”.

Ironically, it is the issue of health risks associated with easy accessibility that led many providers of public lavatories to shut their doors.

While it was once normal for many larger businesses to make their toilet facilities available to both customers and the public, usage restrictions were commonly put in place throughout the 1980s to deal with an increase in intravenous drug use coupled with emergence of blood borne diseases like HIV, AIDS and Hepatitis C. A chief concerns was needle-stick injuries.

However, since then widespread safe needle disposal measures coupled with better design and a big decrease in heroin use over the past decade has led to a renewed a push to make more facilities available – for the purposes for which they were intended.