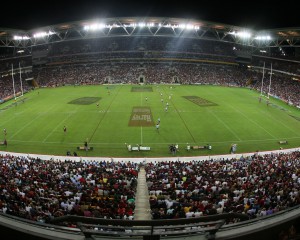 The service provider had held the contract for the past 31 years.

Spotless shares have more than halved in the past month after it shocked the market with a 10 percent profit downgrade and has since attracted the interest of a potential overseas buyer (see our coverage of that story here).

According to Lynch, O’Brien, which employs about 6,000 people compared with Spotless’ 30,000, is aiming to become a dominant facility manager in Australia and New Zealand.

‘It already manages stadiums across both countries, including The Gabba, Melbourne’s AAMI Park, Simmonds Stadium in Geelong, Metricon Stadium on the Gold Coast and Eden Park in New Zealand. O’Brien also manages the Brisbane International tennis tournament, which finished on Sunday,’ he stated.

“O’Brien Group has proven experience across a range of venues and sports around Australia,” Ms Devitt said. “They are innovators within their sector and industry leaders in their corporate hospitality offerings.”

A key part of O’Brien’s bid was a commitment to redevelop Suncorp Stadium’s 70 bars and restaurants.