Advertisement
Code of Conduct for Fair Service Provision in Shopping Centres will be enforced by an independent body in line with ACCC guidelines. This was emphasised at a recent industry meeting by Shopping Centre Council of Australia’s executive director Milton Cockburn. The ongoing industrial dispute between the cleaner’s union United Voice and the Building Service Contractors […] 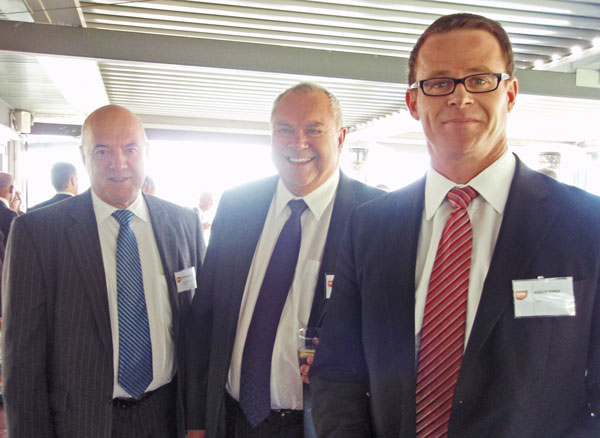 Code of Conduct for Fair Service Provision in Shopping Centres will be enforced by an independent body in line with ACCC guidelines. This was emphasised at a recent industry meeting by Shopping Centre Council of Australia’s executive director Milton Cockburn.

The ongoing industrial dispute between the cleaner’s union United Voice and the Building Service Contractors of Australia (BSCAA) was a hot topic at the BSCAA NSW division’s AGM luncheon, held 6 June at Ecco Ristorante in Drummoyne (Sydney).

BSCAA NSW president Rick Gesterkamp introduced guest speaker Milton Cockburn executive director of the Shopping Centre Council of Australia (SCCA). He was accompanied by deputy director Angus Nardi. Cockburn, who was a journalist for the Sydney Morning Herald for many years, took the floor to give an insight into the SCCA’s position on the dispute.

Cockburn addressed the Association members, praising the SCCA and the BSCAA’s relationship, which he stated had forged a stronger alliance, keeping at bay what would be a very substantial increase in shopping centres’ cleaning costs.

“About four or five years ago the CBD Clean Start campaign started, which is when the dispute with the Union began and the SCCA were somewhat on the sidelines and  learnt a bit about what was wrong in relation to the campaign. We were determined to ensure those mistakes weren’t repeated,” explained Cockburn.

“One of the lessons we learnt was that there wasn’t a lot of communication between the Property Council and BSCAA, so we wanted to rectify that with a closer involvement between the two organisations, both of which have a very significant and vested interest in the goings on.

“We also saw the importance of being aware of what our members’ views were, before we got fully involved, so we asked our members to clearly state their thoughts as the Union had made it very clear that they would be going around the contractors and negotiate directly with shopping centre owners to agree on contracts.

“There is no question that conditions in the retail industry at the moment are the worst I’ve ever seen and there are no signs that it’s going to improve any time soon,” he stated. “We’re also facing significant competition from online retailing  so to some extent we’re facing a ’perfect storm’ in our industry with falling sales, falling rent, which then causes a substantial increase in operating costs, such as council rates, water and electricity rates – some of which have already come into effect in Queensland, New South Wales and South Australia.

In wanting to be proactive in the cleaning dispute, the SCCA negotiated with the BSCAA and on 14 February 2012 released a new Code of Conduct for Fair Service Provision in Shopping Centres. The new Code reflects current industry best practice in the fair treatment of cleaners and the provision of a safe, clean and respectful work environment.

“There’s no other industry which has imposed such tough conditions for its cleaning contractors and it is reflective of both organisations’ high standards,” added Cockburn. “The Code will be used in future cleaning tenders issued by SCCA members and cleaning contractors will be required to demonstrate their ability to adhere to the specific provisions and meet the conditions of the Code.”

“Industrial relations circumstances today are very differently to what they were when the CBD Clean Start campaign was underway – Work Choices has been abolished and replaced by the Fair Work Australia Act, we’ve now got the Modern Award, and the Fair Work Ombudsman has chosen the cleaning industry as one of its first to target.

“I think it’s significant that the Union hasn’t drawn any attention to the FWO investigation and the fact they have found no major problems in the cleaning industry, which I think is something the industry and the BSCAA is entitled to announce and be proud of,” reflected Cockburn.

However, the dispute continues and according to Cockburn the SCCA will not relent. “Whether it’s demonstrations outside shopping centres or a so called objective study of hygiene in shopping centres or using the Uniting Church as a third party, we see them as stunts and will push forward, maintaining our close relationships with BSCAA and maintain our stand against this campaign dispute,” he stated.

“The ACCC takes code of practices very seriously, which is why we took their guidelines into account when drafting the Code. While some people are sceptical as to how well it will operate, we had great results with our original Code of Practice that was negotiated five years ago and authorised by the ACCC. Compliance with this code was phenomenally high and based on this; we believe it will be successful. As the saying goes, the proof of the pudding is in the eating. ”