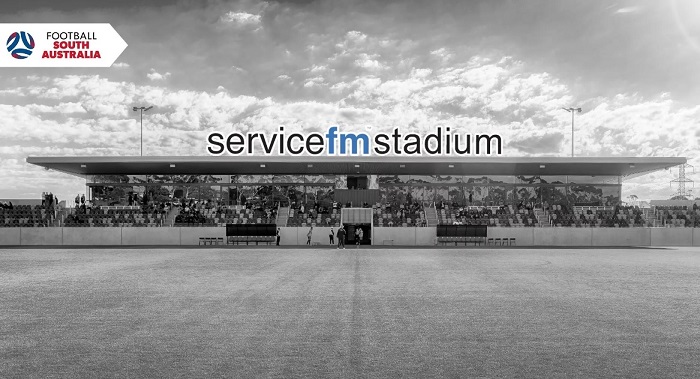 The 7000-person capacity purpose-built football facility in Gepps Cross will be named ServiceFM Stadium officially for the next five years, following an announcement made at the site’s official Grand Opening on Saturday.

On the Grand Opening Day, ServiceFM Stadium hosted Football SA’s Federation Cup final between Adelaide City and Modbury Jets, as well as the Reserves and Under 18’s Cup Finals and a Women’s Cup Semi-Final.

Since opening its doors 13 weeks ago, the facility has hosted more than 500 training sessions, 300 games and welcomed in excess of 26,000 spectators.

“This is an excellent strategic partnership with Football SA and we’re keen to make the most of the opportunity that having naming rights for this brand-new stadium will present.”

“We know how much the football community has craved the development of this stadium and we’re excited to be involved in a sport that generates such massive interest across the nation.”

“We’re delighted to secure Service FM as naming rights partner for the stadium. The partnership will ensure that the stadium is presented as a high-quality venue,” Mr Carter said.

ServiceFM is currently the major sponsor of NPLSA giants Adelaide City, who collected their 18th Football SA Federation Cup title in the inaugural competition final at the venue on Saturday, defeating Modbury 5-0.

Earlier this month ServiceFM announced two changes to its board of directors.

The appointments come 15 months after ServiceFM completed an extensive business and brand transformation.