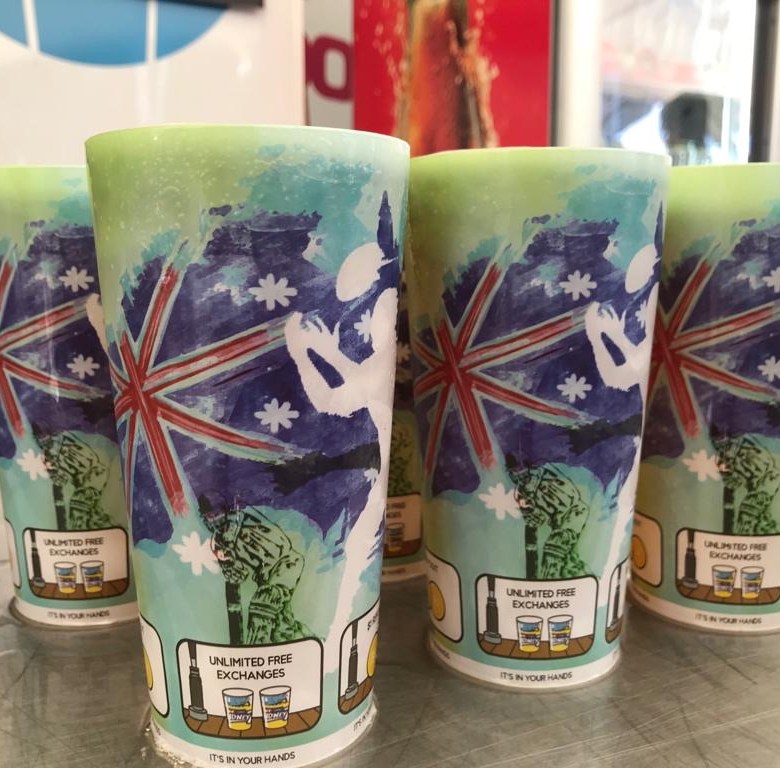 Re-usable beverage cup supplier WISE – It’s in Your Hands has been named as a 2019 Banksia Sustainability Awards finalist.

The Awards, conducted by the Banksia Foundation, are the longest running and most internationally recognised sustainability awards in the world.

The Banksia Sustainability Awards seek out and recognise innovation and leadership through the lens of the UN Sustainable Development Goals (SDGs).

WISE – It’s in Your Hands is a wholly-owned Australian company that supplies re-usable cups to stadiums, events and festivals. Its mission is to remove single-use disposable cups from the environment and replace them with re-usable cups.

WISE – It’s in Your Hands reusable cups replace toxic single-use disposable plastic cups and can be washed and re-used up to 500 times.

Within a year of operation, WISE – It’s in Your Hands cups have seen more than one million cups being diverted from landfill – the equivalent of 3500 household 120 litre wheelie bins.

Craig Lovett, co-founder of WISE – It’s in Your Hands, said the Banksia Sustainability Award nomination was validation within business and within communities that single-use disposable plastic cups should be removed from all major sports, festivals and outdoor events in Australia.

“The nomination is a fantastic accolade to our clients, suppliers and people within the business who have believed in us from the outset. We also thank the judges who spend so much time and dedication in evaluating the many worthy Award entries,” said Lovett.

“WISE reusable cups are a win-win-win-win partnership involving the general public who want a more sustainable future, venues who are looking to eliminate waste going to landfill while reducing cleaning costs, caterers who no longer need to purchase single-use plastic cups and the environment.

“We have witnessed a growing seismic shift in attitude by venue operators towards the elimination of single-use plastic cups and we project that in excess of 3.5 million plastic cups will be diverted from landfill, through the implementation of WISE reusable cups, in 2019-20,” he added.

The agreement includes major race days such as the $14 million The Everest at Royal Randwick in October, and the $3.5 million Longines Golden Slipper at Rosehill Gardens next March.

Category winners will be announced on December 3.