Advertisement
RapidClean's 2014 conference reflected a year of success, growth and for many, a few major business goals scored - and this theme echoed throughout the entire conference. Held over two days from 19 to 20 September, members of the Rapid Group along with 23 of the 26 preferred suppliers, came together at Heritage Queenstown, NZ. 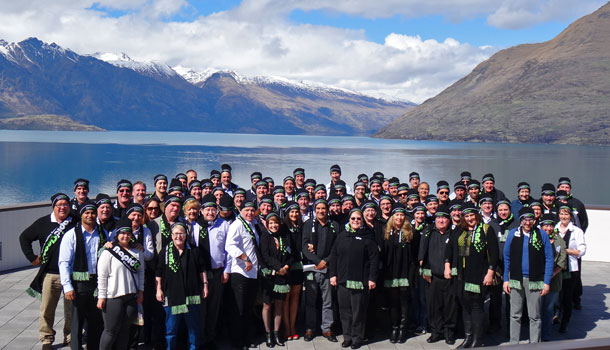 RapidClean’s 2014 conference reflected a year of success, growth and for many, a few major business goals scored – and this theme echoed throughout the entire conference. Held over two days from 19 to 20 September, members of the Rapid Group along with 23 of the 26 preferred suppliers, came together at Heritage Queenstown, NZ, overlooking the picturesque Lake Wakatipu for its 20th AGM, one-on-one business, networking, socialising and a few fun adventure outings.

Growth seems to be a running theme for the Rapid Group as each year the collective grows not only in numbers and support, but in profit. General manager, Bruce Lees, acknowledged this precedent in his presentation about the group’s direction. “We set many goals for last year and together, we have achieved an outstanding result in a flat market,” he reflected.

In addition to these achievements, the Group gained three new members in Rockhampton, Perth and Townsville; released three specials catalogues; and had 16 suppliers and 22 members with double digit growth and four suppliers and 12 members with single figure growth. Rapid also updated its website, which increased online traffic by 30%, built an intranet to increase members’ connectivity and increased its advertising.

“However, there are new challenges that have arisen that we must confront and new goals must be set and achieved if we are going to continue to prosper,” added Lees. “But this year’s harder; our opposition is tougher and we need to fight hard to win and continue to grow. The foundation reason the Rapid Group exists is to improve the profitability of its members and this is at the core of every goal we set and every activity we undertake.”

This led to Lees listing  the Group’s goals for 2015. They include such providing effective marketing material for members; completing the national membership network, as there’s still eight cities without a Rapid distributor; building recognition of the RapidClean brand; and increasing purchasing from preferred suppliers by 15% – just to name a few. “All of these goals are achievable but will require commitment from our members, suppliers, the RapidClean board and team,” Lees stated.

After Lees’ pep talk, the members and suppliers moved to their respective tables for the first of the ‘speed meeting’ sessions, which the Rapid conference has adopted as the most effective way for all members and suppliers to interact with one another. “It’s a great system and really works because you get to talk to every single member over the two days,” commented Chris Van Graan of Intervac. “It’s only 12 minutes but you’d be surprised just how much you can cover in that time.”

The Group also had the privilege of listening to two guest speakers – one of whom was business coach Charmian Campbell who attended last year’s conference. Campbell’s theory is that life revolves around scoreboards and unless you look at the numbers generated from your business, you don’t know whether you’re winning or losing. Last year Campbell had been assisting Adam Cameron of Whereabout Supply and had such successful results that David Thyne and Glenn Stubbs of RapidClean Tasmania hired her for their business.

“You seem to just cope with business and think it’s not going too bad, but Charmian helped us discover all the little stuff that we weren’t doing; she showed us our business stripped back, in the raw, and made us realise there’s so much more we could be doing to make our business better,” shared Thyne. “But 12 months on our business is now kicking more goals than ever before.”

The second guest was at the other end of the spectrum – motivational speaker and professional adventurist Steve Gurney – who shared his tales of success and survival; and the attitude that helped him achieve them. “Winners who achieve their goals are very specific about what they want and don’t accept any consolation; it’s about working smarter, not harder – and it all comes down to attitude,” said Gurney. “It’s not about the one thing you do, it’s the culmination and attitude applied to everything you do – and that can make a big difference in business and in life.”

The conference came to an end with the gala dinner sponsored by Oates, beginning with pre-dinner drinks at sunset overlooking The Remarkables mountain range on the rooftop terrace. The icon conference room was transformed into a winter wonderland where members and suppliers enjoyed a three-course dinner while the end-of-year awards were announced. RapidClean Supplier of the Year was awarded to Oates and accepted by Lucas Paris; and RapidClean Member of the Year was awarded to RapidClean Central Coast and accepted by Lisa Hodges and  Mick Harrington.