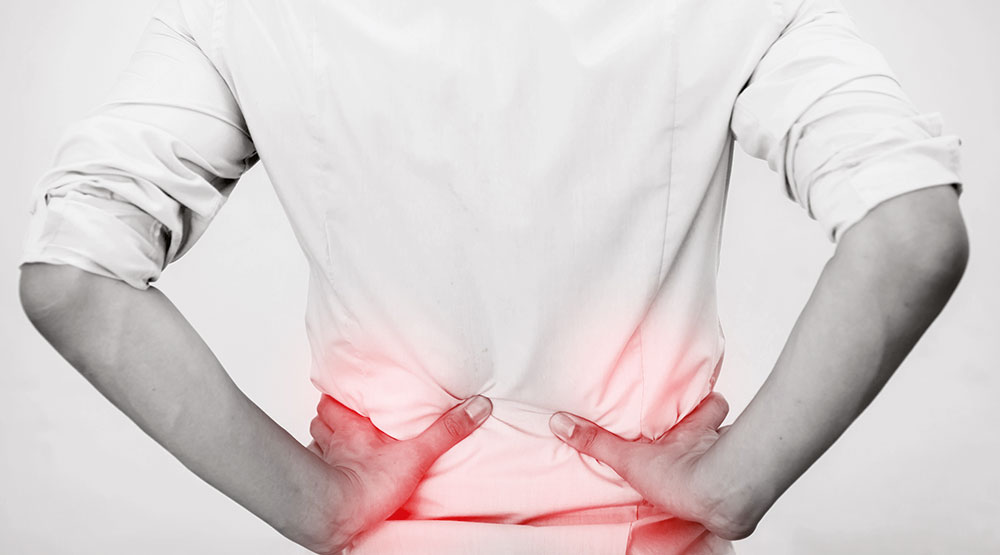 In 2001 I commenced employment as a risk manager in the cleaning industry. For well over a decade of managing safety and workers compensation, it become apparent lower back injury was the most significant injury related issue.

As such, I developed a strong interest in developing more effective risk control strategies to reduce lower back injury and improve return to work outcomes in the cleaning industry.

A few years back, I commenced another PhD researching prevention of lower back injury within the cleaning industry with my research team of Dr Tamara Sztynda and Associate Professors Chris Zaslawski and Sara Lal, through the University of Technology Sydney (UTS). The research was supported by an Australian Government Research Training Program Scholarship.

According to Safe Work Australia, lower back conditions are the most frequent cause of disability in the working population, where eight out 10 people will experience lower back pain at some point in their lives.

Spinal discs commence degeneration as early as the second decade of life (Benoist, 2003). Commencing around the age of 25 in most people, males start to lose 0.3 per cent of bone mass per year and females lose 0.5 per cent bone mass per year which can increase up to 5-6 per cent throughout menopause (Bono and Einhorn, 2003).

According to Safe Work Australia, the cleaning industry has one of the highest frequencies of serious musculoskeletal disorders (MSDs) at 15,115 recorded over a five-year period.

Furthermore, the lower back is the most commonly recorded outcome of serious MSD at 35 per cent, hence a study of lower back injury within the cleaning industry is well justified (Safework Australia, 2016).

As my PhD study enters its advanced stages, in this article I plan to highlight some key findings of the study.

A total of 144 MSDs recorded over a five-year period in a large organisation were analysed.

A total of 76 of 144 (52.78 per cent) MSD’s occurred within the first two hours of a shift suggesting that time of MSD occurrence within a shift is a significant factor and that preventative strategies such as pre-start warm up may be recommended.

The figure below demonstrates the time within a shift most MSDs occurred.

Season of the year of musculoskeletal disorder (MSD) occurrence

A total of 144 MSDs that were recorded over a five-year period in a large organisation were analysed. According to the literature, MSDs occur in the colder seasons of the year due to the colds effect on muscles (Lloyd, 1994).

Hence, it was originally speculated that most MSD would occur in winter due to lifting cold. However, the higher frequency of MSD’s occurred in summer at 44 of 144 MSD (30.56 per cent ) suggesting that heat may result in fatigue which may then result in MSDs.

This suggests that hydration is an important factor for cleaners in order to reduce MSD risk and this should be focused upon during manual handling training.

The figure below demonstrates the season of the year most MSDs occurred.

A total of 144 MSDs that were recorded over a five-year period in a large organisation were analysed. There was a strong statistical relationship identified between the age of cleaners and MSDs in terms of their being lower back or non-lower back related (non-lower back refers shoulder or knee strain etc).

This suggests that while training in correct lifting is important, there should ideally be a stronger focus upon the younger less than 45 years of age group.

A total of 144 musculoskeletal disorders (MSDs) recorded over a five- year period in a large organisation were analysed. It is important to identify and assess hazards and then control them.

According to the literature, competency-based training is well suited to those of non-English speaking background common in the cleaning industry (Jungbauer et al, 2004).

Managers need to understand the concept of competency based training, risk control, what risk management tools they have available, and how to apply them in the field.

A total of 144 musculoskeletal disorders (MSDs) recorded over a five-year period in a large organisation were analysed. This study identified 10 of the 144 MSD (76.39 per cent) recovered from their MSD within four weeks.

This was a good outcome as according to the literature, 60-70 per cent of people recover within six weeks and 80-90 per cent by 12 weeks.

Recovery after 12 weeks is slow and uncertain with only half of those unfit for greater than 12 months returning to work and after two years the recovery chances are close to zero (Andersson, 1999).

Statistical relationships were identified between age and recovery time, confirming that older cleaners do take longer to recover from injury.

This information should ideally be focused upon when developing return to work programs post injury to enhance recovery and reduce workers compensation premium costs.

A total of 144 musculoskeletal disorders (MSDs) that were recorded over a 5 year period in a large organisation were analysed. This study focused upon those MSDs that recorded the existence of a non-disclosed pre-existing MSD related injury or condition and later claimed a work-related aggravation, exacerbation, reoccurrence or deterioration, of their pre-existing condition.

These findings should encourage cleaning organisations to consider their pre-employment strategies in future to ensure new employees are not placed at risk by cleaning tasks.

A total of 220 cleaners were surveyed regarding their knowledge of manual handling. The following outcomes were noted where cleaners may benefit from refresher training in:

This outcome basically highlights the importance of periodic refresher competency-based training in safety. This is particularly the case with manual handling and slips, trips and falls, as these two hazards most commonly lead to lower back injury.

The main aim of the study was to identify, assess and control hazards within the cleaning industry with a view to reducing injury and improving injury recovery times. The four main recommendations to arise from the study were for cleaning organisation’s to consider:

This article first appeared in the November/December issue of INCLEAN Australia magazine.