Advertisement
E tū and Spotless have been working together to fix cleaner pay issues, following claims that Spotless cleaners are still not being paid on time despite the contracting company promising last month to resolve pay issues within days. 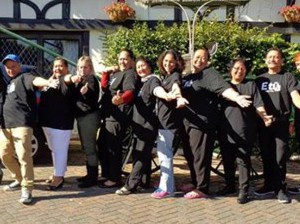 The New Zealand cleaners’ union E tū and contracting company Spotless have been working together to fix cleaner pay issues following claims that Spotless cleaners are still not being paid on time despite the company promising last month to resolve pay issues within days.

E tū, which fights for fair pay and conditions for tens of thousands of workers in New Zealand, previously dubbed Spotless the ‘Novopay’ of the cleaning industry, after it received ‘hundreds of complaints of underpayment; incorrect holiday pay; no pay at all in some cases, as well as workers not receiving pay slips’.

The union and payroll managers from the contacting company met today on 14 June 2016 and have begun ‘working on a process to sort out pay problems quickly’, which includes a pay problem incident form for cleaners to use to document their claims of when they have been short paid.

“Part of the problem appears to be cleaners successfully clocking in using the new voice recognition system, but not clocking out,” explained E tū industry co-ordinator Jill Ovens.

“If this happens, they are paid only a fraction of the actual hours worked.”

Cleaners have told the union that they often can’t clock in because ‘the voice recognition system is busy and tells them to call back later or it does not recognise their voice if they have a cold or if there is background noise’.

Another issue is that Spotless sends out pay slips via email.

“This is all very well in a workforce where workers have smart phones or computers, but there is a digital divide in New Zealand with cleaners paid such low wages that they can’t afford this technology,” stated Ms Ovens.

“In fact, the pay slip that cleaners get does not itemise day by day what they have been paid. It wasn’t till our meeting today that we could see in the detailed breakdown where the problems lay with one cleaner who has consistently been short paid.”

Ms Ovens also added that ‘until cleaners get their pay slips, they can’t pinpoint where the problem occurred’.