Advertisement
Delivering educational events is a core ethos of the Professional Housekeepers Association of NSW (PHAN) and its recent hotel site visits reinforced that value offered to members. 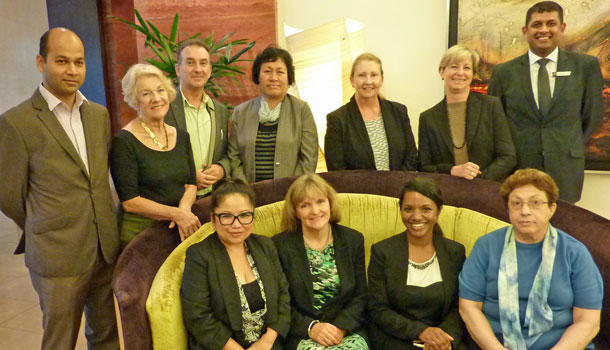 Delivering educational events is a core ethos of the Professional Housekeepers Association of NSW (PHAN) and its recent hotel site visits reinforced that value offered to members. It also reflected a generosity of spirit by those hotels and their managements who made PHAN members so welcome.

“These hotel visits are a wonderful opportunity for our housekeeping executive members to observe what hotels other than their own are doing in terms of room design, fit-out, technology and service delivery,” noted PHAN president Maureen Jolowicz.

“We greatly appreciate the time and effort our hosts put into making us feel so welcome,” she added.

The Amora, located in Jamieson Street in the heart of the CBD, is very much targeted at the business fraternity.  It comprises more than 400 guest rooms, seven meeting rooms, restaurants, and a dedicated ‘relaxation zone’ comprising spa, pool, sauna, jacuzzi and gym. About 15 years old, significant investment has been made in offering guests state of the art technology (high speed internet!).

Closer to the Quay in George Street, the Four Seasons has been a hotel since (under various names) since the early 1980s. It has more than 530 guest rooms – a wide mix of rooms and suites – and reflects impressively its international ‘Four Seasons’ heritage and style.

“Our members were not only able to discuss first hand with Amora and Four Seasons’ executives common housekeeping issues, it was also an opportunity for them to network,” pointed out Jolowicz.

The complexity of a ‘traditional’ executive housekeepers’ responsibilities are made more demanding today with the now industry-wide outsourcing of room cleaning to contract teams.

While these five star hotels have high occupancy rates with concomitant profitability, the pressure is on executive housekeepers to maintain a tight control on costs – and even reduce costs. Hence the move to specialist contractors.

For more photos go to the INCLEAN image archive