Advertisement
A joint venture between OCS, Auckland Airport, the Ministry of Primary Industries and Air New Zealand has developed ‘an innovative way of reusing processed aircraft cabin waste, with more than half (57 per cent of 114 tonnes) being recycled’. 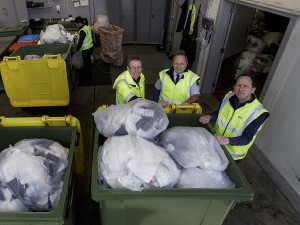 The joint venture between global facilities management company OCS, Auckland Airport and the Ministry of Primary Industries (MPI), in collaboration with Air New Zealand, has developed ‘an innovative way of reusing processed aircraft cabin waste, with more than half (57 per cent of 114 tonnes) being recycled’, stated a 23 March press release from OCS New Zealand.

“The waste facility has since exceeded expectations in terms of the amount of waste reused and recycled,” said Auckland Airport sustainability manager Martin Fryer. “Our goal is to reach 80 per cent diversion of the airport’s waste from landfill by 2030.”

The waste management facility was created by repurposing a run-down building and staffing the facility with trained shift workers from OCS.

Mr Fryer said that “prior to the facility opening in June 2015, 40 tonnes of cabin waste was compacted, steam sterilised and buried in landfill each month to meet MPI’s biosecurity risk requirements.

“Frustration with the waste management process and lack of innovation was the inspiration behind the change,” he explained.

MPI senior quarantine officer Doug Farr said “it was a daring move to think outside the box’, but he was ‘happy to work with OCS and Auckland Airport to identify non-risk items that could be streamed off individually for re-use and recycling.

“The new process of sorting waste has made the real biosecurity risks easier to manage, as genuine risk items are easier to steam sterilise once separated from a pile of other waste,” noted Mr Farr.

According to press statement, Air New Zealand has also welcomed the new facility.

“Waste minimisation is a priority for us under our sustainability framework,” said Air New Zealand’s head of sustainability, James Gibson.

“While we’ve seen great recycling rates from our ground sites, this facility has allowed us to substantially improve our approach to international inflight waste management, which is subject to far greater restrictions due to biosecurity controls.”

The press release also stated that ‘the biosecurity and transitional waste facility is attracting attention from other international airports that see this initiative as an ideal method for recycling reusable aircraft cabin waste.’