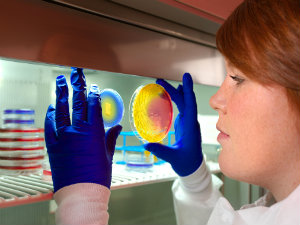 Australia’s major public hospitals have recorded a marked fall in the rate of healthcare-associated ‘Golden Staph’ bloodstream infections, the latest report from the National Health Performance Authority (NHPA) shows. The embargoed statement was released this morning.

However, the report also shows that large differences remain between individual hospitals, with patients still up to three times more likely to catch this bloodstream infection depending on the hospital where they receive care.

Golden Staph, more correctly known as Staphylococcus aureus (S. aureus), is a bacterium often found on the skin of healthy people. It is relatively harmless unless it enters the body, where it can cause serious illness if it gets into the bloodstream. Most cases can be treated by antibiotics, but there are more serious antibiotic-resistant strains. Estimates suggest 20 to 35 percent of people who experience healthcare-associated S. aureus bloodstream infections die from this or a related cause, and some patients (such as those with impaired immunity) are more susceptible than others.

Australia’s major and large public hospitals together accounted for nearly 90 percent of the healthcare-associated S. aureusbloodstream infections reported in 2013/14.

The report highlights variation in the rate of healthcare-associated S. aureus bloodstream infections across similar hospitals.

At major hospitals with more vulnerable patients, the rate of infection was more than three times higher at some hospitals than others, ranging from 0.59 cases per 10,000 patient bed days at Wollongong Hospital to 2.32 at St Vincent’s Hospital (NSW)

At major hospitals with fewer vulnerable patients the rate of infection showed a similar level of variation, ranging from 0 cases per 10,000 patient bed days at South West Warrnambool to 1.67 at Frankston Hospital (Vic).

National Health Performance Authority CEO Dr Diane Watson said through nationally consistent reporting hospitals are able to see their results and how they compare with hospitals that are similar in size and services. Public reporting of healthcare-associated infection rates abroad is associated with a substantial reduction in these types of infections.

“While the reduction of about 100 cases is an improvement, we should remember that every healthcare-associated bloodstream infection is both potentially deadly and preventable,” Dr Watson said.

“Differences in the rate of infection suggest there is an opportunity for hospitals to continue to learn from each other to lower infection rates.”

The government-agreed target calls for a rate of no more than 2.0 healthcare-associated S. aureus bloodstream infections per 10,000 patient bed days for each state and territory.

Individual hospital results, including results for private hospitals, are available at www.myhospitals.gov.au

Dunlevy’s report noted that in total there were 1,621 cases of healthcare associated staphylococcus aureus and ANU infectious diseases expert Professor Peter Collignonsaid this compares with around 4,000 infections a year more than a decade ago.

“Two thousand fewer episodes a year means you are talking 400 fewer deaths per year,” he noted.

Professor Collignon explained that counting the infections had forced hospitals to focus on the issues and the number of healthcare acquired infections had plunged by 50 per cent in the last decade.

He said a mixture of hand washing and improvements in the insertion and changing of intravenous lines used to deliver treatment were behind the improvement.