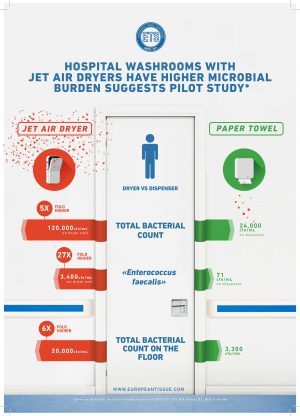 A UK study has suggested hospital washrooms with jet air dryers may be at risk of spreading more germs than those using single-use paper towels.

The study, funded by the European Tissue Symposium (ETS), was carried out over seven days during a three-month period by Professor Mark Wilcox from the Microbiology department at Leeds Teaching Hospitals NHS Trust and the University of Leeds.

The experts examined the number of microbes in the air and on the surfaces in two men’s washrooms in the same hospital: one had paper hand towels to dry hands after hand washing and the other had a jet air dryer. The washrooms were used by hospital staff, patients and visitors.

In particular the jet air dryer washroom carried higher levels of Enterococcus faecalis bacteria which can spread infection in hospitals and cause sickness in people with underlying health conditions or a weakened immune system.

The study suggests microbe levels may be higher in hospital washrooms with jet air dryers than in those with paper towels. The findings could be important for hospitals where preventing and limiting the spread of infection is crucial and where patients have a lower resistance to infection.

“The key issue is whether this could expose patients and other washroom users to infection,” explained Professor Wilcox.

“We need further research to understand more about the risks of infection spreading as a result of hand-drying methods.”