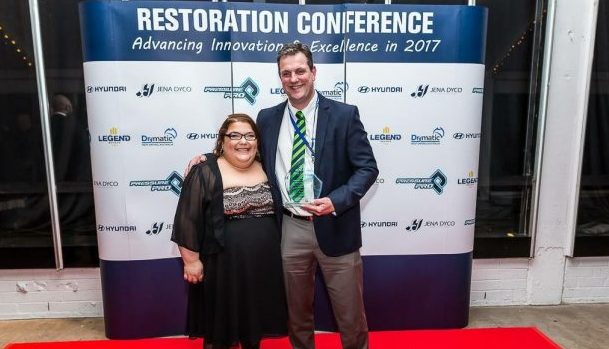 The achievements of Australia’s restoration industry have been recognised and celebrated at the ninth annual Jena Dyco Conference and Expo.

The Jena Dyco Restoration Awards, now in its fourth year, were held at the event’s gala dinner, which marked the end of the three-day conference in Melbourne.

The Jena Dyco Conference and Expo also included a one-day intensive Mould Forum on Wednesday, 31 May, followed by a two-day conference and exhibition on Thursday, 1 June until Friday, 2 June.

The first award of the night, Residential Restoration Project of the Year, was won by Quantum Restoration Services.

Accepting the award, Quantum Restoration Services managing director Mehmet Ucar thanked “everyone that has been involved in [Quantum’s] success”.

“It’s recognition for our team and all the hard work that they put in,”Joe Bonfa CEO of FRA said, “and this job was especially hard being in Mt Hotham [because] of the weather conditions and the accessibility of the job.”

The newly added Specialised Cleaning Project of the Year – which received the highest number of entries across all categories – was awarded to Biosafety.

Brett Cole, managing director of Biosafety, said the introduction of a specialist cleaning award was a “great thing for the industry”.

Biosafety was awarded for its work decontaminating a research facility that had a pinworm infestation, which Cole described as a “three-stage project”.

“There’s no standard for cleaning pinworm so we had to look at the US and at global research that had been done on different techniques. It was a three-stage project that required deep cleaning, fogging and then fumigation,” Cole said.

“Once the infestation gets into research populations it kills millions of dollars worth of research – medical research – so I think there’s an opportunity for all companies to get involved in this sort of work.”

Congratulations to all the winners

Read more about the Jena Dyco Restoration Conference and Expo in the upcoming July/August edition of INCLEAN magazine. To subscribe, click here.