Advertisement
The ISSA/INTERCLEAN 2016 Amsterdam Innovation Award is now open for entries. All exhibitors are invited to enter their most innovative designs to be judged by an independent, international jury. 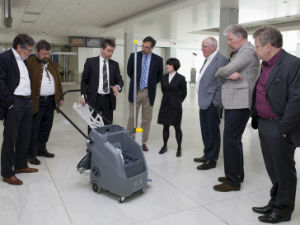 The ISSA/INTERCLEAN 2016 Amsterdam Innovation Award is now open for entries. All exhibitors are invited to enter their most innovative designs to be judged by an independent, international jury. The Award winners will be announced on the first day of ISSA/INTERCLEAN Amsterdam, Tuesday 10 May. Exhibitors wishing to submit products for the Award should complete the online application by 24 January.

This year’s event witnesses the introduction of the InnovationLab, which has been ‘specially designed to be an inspiring environment where pioneering products and other revolutionary ideas are presented and discussed by exhibitors and visitors alike, and where knowledge and experiences in the field of cleaning innovation are shared freely. In this futuristic setting, the nine nominated products will be in the spotlight.’

At the InnovationLab, attendees will be able to browse the details of all Amsterdam Innovation Awards’ short-listed submissions on iPad tablets and evaluate the features and performance data that make them ‘ground-breaking’.

“Innovation propels the cleaning sector forward and ISSA/INTERCLEAN has long been the platform of choice when it comes to showcasing new developments,” noted RAI’s manager ISSA/INTERCLEAN, Rob den Hertog.

“In addition to the Amsterdam Innovation Award, the Amsterdam show always witnesses thousands of innovations and new products. Yet, due to the competitive ‘noise’ of the large number of introductions and the wide range of marketing and promotion opportunities available, not all these product launches get the full attention they deserve.

“The new InnovationLab concept helps address this issue and creates a platform so that no true innovation need go unnoticed any longer.”