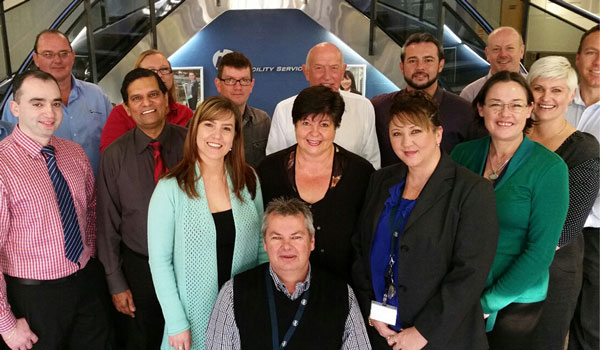 A small number of the 1,600 team of ISS employees in NZ, gathered to celebrate the Award

ISS has a strong presence throughout New Zealand. With more than 1,600 employees, ISS delivers services such as cleaning, property and support services to hundreds of customers across the country. Overall, the ISS Facility Services A/S group has 530,000 employees across 52 countries.

“This is an outstanding achievement for our New Zealand business that has undergone a challenging journey over this past year to improve service delivery to our customers and empower our staff,” said ISS New Zealand’s regional general manager, Russell Kerr, of the Awards.

“We’ve had had a strong focus on implementing measures that drive stakeholder engagement, and have since seen remarkable improvements in the engagement scores of our annual Employee and Customer Engagement Surveys,” he noted.

The business has introduced many initiatives since 2013 including an employee rewards and recognition scheme; new training and development programs; and improved its health and safety accreditations.

Recipients of the awards were judged according to research conducted for Frost & Sullivan’s latest analysis of the New Zealand market. “In less than a decade, ISS Facilities Services (ISS) has successfully positioned itself as one of key players in New Zealand’s facilities management market,” commented Uzairi Hajazi, research analyst at Frost & Sullivan.

“Its outstanding operational capability, as well as excellent implementation of growth strategies, has provided ISS a strong platform to be the leader in this marketplace, thus making it a deserving recipient of this award.”

In 2013, ISS’ Asia Pacific Business was also selected as award recipient of the ‘2013 Frost & Sullivan Asia Pacific Facilities Management Company of the Year’.