Advertisement
In making the personal decision that it was an appropriate time to retire, InterVac Australia director and major shareholder Ken Taylor leaves the cleaning industry after almost three decades. 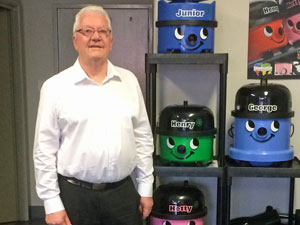 Ken Taylor with some of his friends... Henry, George and Junior

In making the personal decision that it was an appropriate time to retire, InterVac Australia director and major shareholder Ken Taylor leaves the cleaning industry after almost three decades. In turn, Ken’s retirement sees the acquisition of the Perth-based InterVac by Edco, which will officially take place on 1 October.

Ken grew up in the UK and attended St Marylebone School, Westminster (London). He never really lost his London accent and, more importantly, his gentlemanly ‘English’ approach to people and business.

It was during his years with industrial distributor Atkins Carlyle that Ken became closely associated with UK-manufacturer Numatic. From early 1988 until mid-2002 he was sales manager of Atkins Carlyle which, in the mid-90s, became Numatic’s Australian distributor.

Numatic is the UK’s largest cleaning equipment manufacturer and offers a prodigious range of products including auto scrubbers, vacs and carts and trolleys.

Following Atkins Carlyle’s corporate demise, Ken seized the opportunity with some fellow investors to establish InterVac International in early 2003 with its initial brand Numatic forming a strong trading base.

Numatic was later joined with the addition of products from several other companies from around the world, all of which dovetailed nicely to form a very comprehensive range of quality cleaning equipment. Those brands included Kaivac, Cilmas and Tecnica.

“The cleaning industry has been such an important part of my life for some three decades and I will miss it dearly. Obviously I will be keeping in contact with my many friends in the Australian industry as well as the team at Numatic,” Ken told INCLEAN.

“There are many distributors and their end-user customers that have been so supportive to me, InterVac and our brands, and I thank them all sincerely.”

The Australian cleaning industry wishes Ken and his family all the very best in retirement. His cheery demeanour will be missed.