Advertisement
INCLEAN editor Claire Hibbit sat down with Flood Restoration Australia CEO Joe Bonfa to talk about FRA’s growth and some of their biggest challenges to date. 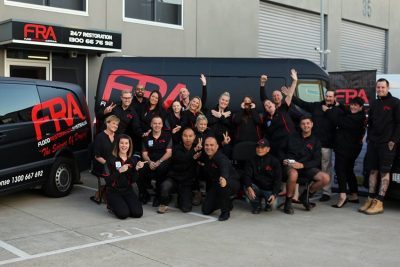 Flood Restoration Australia (FRA) has moved into a new 1000sqm facility, it third move in as many years, as the Victoria-based company continues to expand. INCLEAN editor Claire Hibbit sat down with CEO Joe Bonfa to talk about FRA’s growth and some of their biggest challenges to date.

In the past four years Flood Restoration Australia (FRA) has grown from a single-state operation with a handful of technicians to a staff of 50 across Victoria, New South Wales, Albury Wodonga, and most recently, Tasmania.

During that time FRA has also moved from a 200sqm warehouse in Melbourne’s Brunswick, to its soon to be opened 1000sqm facility in Braeside – its third move in as many years.

“We’re in the middle of an expansion phase,” Joe Bonfa, FRA CEO told INCLEAN magazine.  “Victoria is our original base and that still remains our strongest base, but Tasmania is quickly growing – we’ve got four vans there now. We’ve been in NSW for almost two years and our focus is on continuing to grow that market. Hopefully down the track we can grow along the eastern seaboard,” Bonfa said.

Bonfa, who formed FRA in 2010, having previously operated Melbourne Central Cleaning, says he’s witnessed “accelerated change” in the industry over the past five years.

“There’s now more accountability, more players in the market and there’s more education and awareness around issues like mould and indoor air quality.”

According to Bonfa, price continues to add further pressure to the industry, as well as the allocation of claims to builders by insurers, which he says has become more prevalent in Australia over the past three years.

“It’s getting to the stage now where it’s going to compromise the delivery and the level of service. There’s only so much you can cut before it starts to effect delivery. Ultimately, the end loser will be the insured.

“A builder by their very nature is set up to strip out and reinstate, so the lines get a bit blurred there, so you have to ask, are they really trying to restore or are they trying to replace? Our core business is to restore. It’s much more cost effective and the inconvenience to the homeowner is less,” Bonfa said.

“With this happening more and more, we’re concerned that the emphasis will become more on stripping and replacing instead of restoration and, it’s proven that restoration is more cost effective if it’s restored correctly. This is where our main point of difference is that FRA has a drive to continuously success by achieving our goals and excelling.

“We think there’s a place for everyone – there is a place for restorers and there’s certainly a place for builders as well, they can work hand in hand and complement each other.”

This first appeared in the May/June issue of INCLEAN magazine. Click here to keep reading.