Advertisement
Leading occupational skin care company Deb Group held a ceremony on 27 June to celebrate the opening of its $15 million state-of-the-art manufacturing facility in Moorebank Business Park, South Western Sydney. Deb’s stakeholders, partners and customers were invited for a tour of the new facility which was officially opened by New South Wales Premier the […] 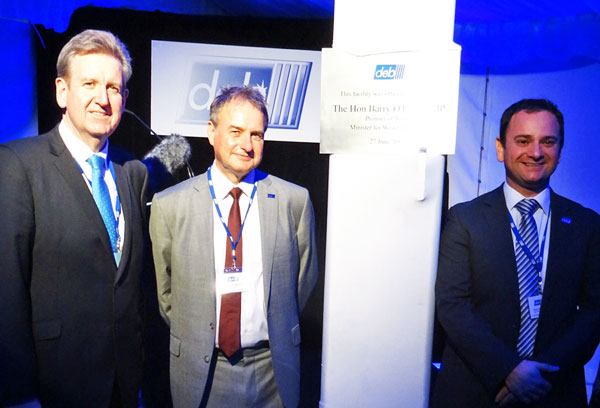 “This is a very special occasion for Deb in officially opening  this 15 million dollar state-of-the art manufacturing facility – it will be the hub of operations in Australia, New Zealand and South East Asia,” said Steve Saboune, Deb Australia’s managing director. “This major investment by Deb clearly demonstrates our confidence in Australian manufacturing. In moving from Chipping Norton to Moorebank we have stayed true to south western Sydney. Moorebank also insures we are in a prime location for efficient distribution near major transport corridors including the M5 and M7 motorways and the future Sydney bypass motorway.”

This new purpose built premises will allow Deb to better serve its current and future customers, declared Sabourne. “In designing this site, we have built in enough capacity to cater for continued growth for many years to come. That fast growth will also benefit local jobs and we predict job growth at Deb will be about 10 percent in the first year.”

Meanwhile the hardware inside the building itself is a monument to local investment with the vast majority of the shiny new equipment manufactured from domestic suppliers.

“While we’re celebrating this occasion today, over 3 million Australians will be using a Deb manufactured product with over eight million uses each day, very few manufacturers can claim to touch so many people in any given day, this goes along way in keeping Australia clean and hygienic,” stated Sabourne.

“This new facility will also allow us to continue leading our category through ground breaking product innovation. On behalf of the Deb board, I’d like to thank you all for making it today, thank all our stake holders and partners, but in particular our customers, many of who have partnered with Deb for many years making this investment so worthwhile and it would not be here without you.”

Premier Barry O’Farrell took the podium to officially open the facility, revealing an engraved silver plaque that will be hung on the facility’s foyer.

“One of the reasons I’m delighted to be here today is the investment Deb has put into this facility and that’s no mean ask at a time when the investment was made the Australian dollar was much higher than it is today and the significance of that goes to the productivity and competitiveness of facilities like this that supports jobs in Western Sydney,” said O’Farrell.

“What’s important for governments to recognise is that we can’t do much for you except create a an environment that gives you some confidence to invest in New South Wales.

“Can I say on behalf of the government of New South Wales I’m delighted to support a local manufacturer who is delivering jobs in this area; delighted to see the products being produced here are exported form this country. I’m delighted to acknowledge that government can’t solve every problem, government can’t give people all the jobs they need, governments can’t  create wealth. That’s done through the private sector – through investments like this… so thank you to Deb, and in particular to the investment that will hopefully see jobs grow on this site for years to come.”