Advertisement
An examination by the UK's Equality and Human Rights Commission (EHRC) has revealed that some employers in the commercial cleaning industry are failing to meet their responsibilities to their staff in relation to pay, holiday or sick leave and dealing with their concerns. Many cleaners feel that their employer, client firms and the public do not treat them with the dignity and respect everyone should expect, states a EHRC press release. 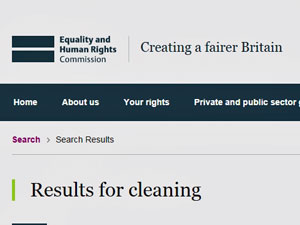 An examination by the UK’s Equality and Human Rights Commission (EHRC) has revealed that some employers in the commercial cleaning industry are failing to meet their responsibilities to their staff in relation to pay, holiday or sick leave and dealing with their concerns. Many cleaners feel that their employer, client firms and the public do not treat them with the dignity and respect everyone should expect, states a EHRC press release.

The EHRC report was released mid-August 2014 and can be found at:
www.equalityhumanrights.com/invisible_workforce

The non-domestic cleaning workforce is largely made up of women, migrant and older workers. While the Commission found many examples of good practice in employment and working conditions, many cleaners spoke of being ‘invisible’ – the ‘lowest of the low’, being spoken to rudely and treated badly compared to  other employees.

Despite the AUD$14.3 billion (8 billion pounds sterling) contribution the cleaning industry makes to the British economy each year, large numbers of cleaners reported problems with under-payment or non-payment of wages. This can drive them into poverty and indebtedness.

The report identified examples of workers being sacked for complaining about not being paid in full and on time.

The industry has been the subject of extensive outsourcing since the 1970s and price competition has led to a general downward pressure on wages and working conditions.

The Commission found that longer contracts created a more positive relationship between the client and the cleaning firm, gave greater job stability to cleaners and encouraged investment in workforce development.

Migrant workers’ lack of awareness of employment rights and poor language skills left them particularly vulnerable to mistreatment. Some of the migrant workers interviewed had not been given an employment contract; others did not have their contracts adequately explained to them. A few migrants said employers used language barriers to avoid paying them in full.

In some cases workers were told by their employer they were not entitled to paid holiday or sick leave, although they were permanent workers with legal entitlements. Some felt pressurised into going into work when they were ill and others were expected to arrange their own cover.

Some cleaners said they had nowhere to take a break as some clients did not provide for this and they were denied access to staff canteens, and some workers had to eat their meals in cupboards full of mops, buckets and cleaning chemicals.

The Commission, which promotes and enforces the laws that protect everyone’s right to be treated with fairness, dignity and respect, makes a number or recommendations for the industry.

These include encouraging clients to commission cleaning services at living wage rates, as a matter of good practice. It also wants them to consider what action they can take to ensure cleaners are treated with the same dignity and respect as their own workforce and customers.

The Commission is now setting up a taskforce, chaired by EHRC deputy chair Caroline Waters, to look at issues raised by the report, identify examples of good practice and ways of taking these forward.

Equality and Human Rights Commissioner, Caroline Waters said: “Fairness, dignity and respect are values we all share. Yet the Commission uncovered some disturbing evidence of the absence of these in the treatment of many cleaning workers by supervisors, clients and the public. Cleaners are largely invisible, despite the cleaning workforce numbering nearly half a million people.

“Our evidence showed that, while many workers are treated well, enjoy their job and have their rights upheld, a significant number do not.  Cleaners do physically hard work and often take great pride in their jobs, but many felt that they were not appreciated or afforded the dignity and respect shown to others in the workplace.

“They may be bullied by supervisors, have problems with their pay, and have excessive workloads. This can often be linked to a focus on reducing costs at the expense of good practice in employment and contracting.

“I am looking forward to working with the cleaning firms, Union representatives, clients, trade bodies and government organisations that make up this yearlong taskforce. Together I believe we will identify key actions to improve practices across the sector and ensure that everyone understands their role in ensuring workers are treated with dignity and respect.”

Examples of good practice were –
* Cleaning firms providing tender proposals for contracts at both the market rate (often minimum wage) and at a living wage rate.
* Clients setting the contract value to cover the costs of paying workers a living wage and including living wage clauses in contracts
* Clients introducing daytime cleaning to reduce their energy and security costs, so allowing cleaning firms to offer workers regular sociable hours, with opportunities for longer or full time hours.
* Clients integrating contractor workers into their workforce through involvement in the client firm’s training, staff meetings and social events.
* Clients and cleaning firms valuing cleaning staff: in some cases this meant basic social niceties such as greeting or thanking individuals; in other cases, firms had specific events or awards to recognise good team work or performance.
* Clients and cleaning firms providing training that broadened skills and opened career opportunities:  this included induction into clients’ policies and procedures, and access to customer service training or to health and safety training leading to accreditation.