Advertisement
A park in Beijing has installed toilet paper dispensers with facial recognition to stop visitors from using too much toilet paper. 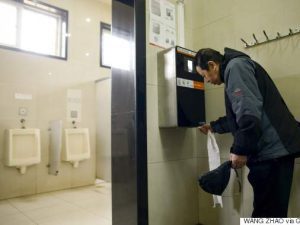 A park in Beijing has installed toilet paper dispensers with facial recognition to stop visitors from taking too much toilet roll, media reports say. Machines at the Temple of Heaven park scan visitors’ faces before dispensing a fixed length strip of paper.

The tourist attraction is reportedly frequented by visitors who take large amounts of toilet tissue home. Park officials have installed six machines at its public washrooms in a two-week trial, with staff on standby to explain the technology to visitors. The existing dispensers have been left in place.

The new machines, placed at the average heights for men and women, dispense strips of toilet paper measuring about 60 to 70 cm to each person. They will not dispense more paper to the same person until after nine minutes have passed.

“If we encounter guests who have any situation in which they urgently require more toilet paper, then our staff on the ground will directly provide it,” a park spokesman told Beijing Wanbao.

Earlier this month Chinese media reported that visitors to the Temple of Heaven park’s toilets were taking excessive amounts of toilet paper, some of whom were seen stuffing their bags.

The trial appears to have had initial success – the park told Beijing Wanbao that the daily amount of toilet paper used in its toilets has gone down by 20 per cent.

But the new system has also had teething problems. Reports said the machines, which are supposed to scan a face in three seconds but in reality can take up to 30 seconds, had caused delays and confusion.