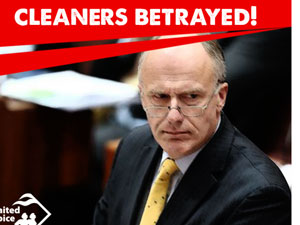 Terry Corby, president of Building Service Contractors Association of Australia (BSCAA) NSW division, contacted INCLEAN with a rebuttal to the below post:

“This article only represents one side of the argument. Since the introduction of the Clean Start agreement the industry has had some difficulties with a two tier wage and pricing structure,” explained Corby. “The Award verses Clean Start pricing has disadvantaged the industry and this article disparages the current Government’s attempts to level the playing field.

“The Government repealed the decision previously and in no way misrepresented its position,” he stated.

Labor had earlier successfully moved amendments in the upper house that were aimed at forcing the government to back down on plans to scrap changes to the guidelines that control the pay rates of cleaners.

Labor and unions said the amendments were a victory for commonwealth cleaners who would have had their minimum rate of pay cut from $22.02 an hour to $17.49 an hour.

However, government sources subsequently revealed that Minister Abetz had ‘signed an instrument revoking the guidelines’ before the bill passed the parliament. “This reflects the government’s commitment to revoking the cleaning services guidelines by July 1,” stated the spokesman, according to The Australian’s report.

‘This week the Senate voted to protect the Commonwealth Cleaning Services Guidelines, which ensure fair pay and working conditions of cleaners working in Commonwealth buildings.

‘But at the same time, Senator Abetz secretly moved to abolish the Guidelines and rip away more than 20% of the cleaners’ wages by reducing their minimum wage from $22.02 per hour to $17.49 per hour.

‘This means some Commonwealth cleaners could lose up to $172 a week.’

David O’Byrne, acting national secretary of United Voice, said “United Voice is taking advice on what seems to be a deliberate attempt by Senator Abetz to subvert the parliamentary process.

“While the Parliament was debating this matter, there was not a hint from the Government of what they were doing secretly behind closed doors.

“This makes a mockery of Prime Minister Tony Abbott’s statement in Parliament on 16 June when he said ‘I want to make it absolutely crystal clear that no cleaner’s pay is reduced.’

“We call on the Prime Minister to do be true to his word.

“Tony Abbott needs to pull his Employment Minister into line, to do the right thing by the Parliament and by the cleaners who work so hard to make sure the Governments’ buildings are clean and safe.

“The past 24 hours have been bitter for cleaners. Yesterday they celebrated the Senate’s recognition that the Guidelines are essential to ensure fair and reasonable working conditions. Today they face the future with anxiety and uncertainty,” O’Byrne emphasised.