Advertisement
Reflecting the increasing strength of RapidClean’s financial credentials, the group is poised to achieve a $20 million turnover by the end of 2012. RapidClean held its annual  AGM and conference at the Rydges Esplanade Hotel in tropical Cairns from 11 to 13 October, hosting more than 100 people representing 24 members and 22 preferred suppliers, for three […] 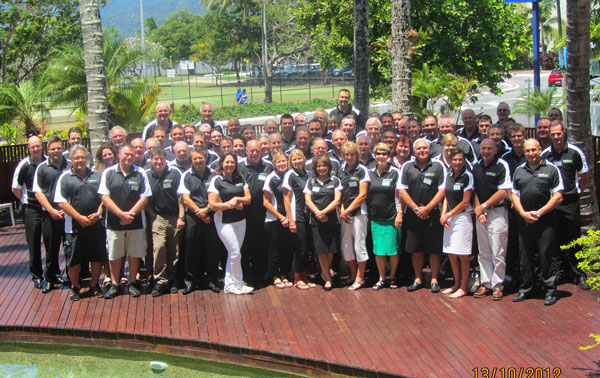 Reflecting the increasing strength of RapidClean’s financial credentials, the group is poised to achieve a $20 million turnover by the end of 2012.

RapidClean held its annual  AGM and conference at the Rydges Esplanade Hotel in tropical Cairns from 11 to 13 October, hosting more than 100 people representing 24 members and 22 preferred suppliers, for three days of networking, socialising, a repeat of last year’s successful one-on-one ‘speed meetings’, and some good food and fun thrown in.

Day one kicked off with a social Ocean Spirit cruise of the Great Barrier Reef to Michaelmas Cay, graciously sponsored by Tork, for which Cairns delivered picture perfect weather. Members and suppliers enjoyed a swim and a snorkel on the reef before returning to the hotel to join the remaining attendees for a fire and ice buffet dinner in the Coral Hedge Brasserie.

Conference registration started early on Friday with the AGM followed by a members’ only session. Newly appointed chairman of the RapidClean board, Greg Wild, took the microphone to welcome conference attendees with the success of the group’s turnover, improving on last year’s $16 million, with this year tracking to bust the $20 million mark.

A few other important topics mentioned were the new RapidClean head office now located in Penrith (Sydney), the welcome of Donna Willmette as the new office manager, and the appointment of national accounts manager Robert Musilli, who has been instrumental in the acquisition of new membership throughout Victoria.

RapidClean’s general manager Bruce Lees took the stand to thank members for a great year. “In terms of growth, I’d like to thank members and suppliers for working together to achieve some remarkable results,” he said. While Lees’ address focused on the future plan for RapidClean, he first reflected on how far the group has come. “We have built some infrastructure and foundations which will enable the group to continue to grow as a major player in the commercial cleaning supply industry.”

“I see our group as similar to the AFL Swans football team, in that we’re a team that is capable of great things if we work together to reach a common goal,” observed Lees. “A champion team rather than a team of champions.”

Lees went on to define clear and simple goals for the coming year with some of the focuses to secure new business, provide marketing material to members, progress with nationwide membership network building, build brand and private labelling and to increase the group’s profile within the market. “To achieve these goals it involves input from members, suppliers, the board and RapidClean office team,” said Lees.

For the full story, see the November/December issue of INCLEAN.