Advertisement
By Bill Griffin* I think just about everybody had a good time at this year’s ISSA/INTERCLEAN Show in Orlando. With so many activities each day, there was truly something of interest for everyone, regardless of their specialty. ISSA management staff has done an excellent job of continuing to build the ISSA/INTERCLEAN North America Show into […] 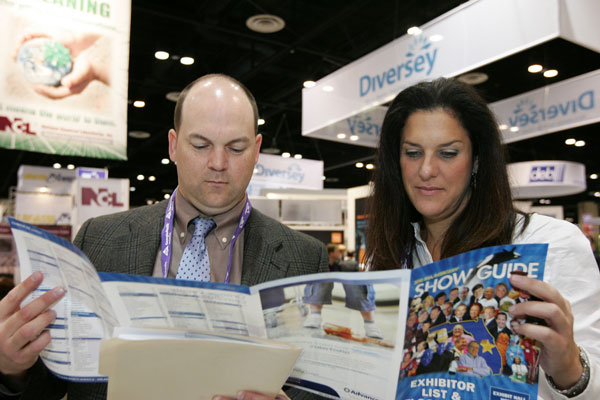 By Bill Griffin*
I think just about everybody had a good time at this year’s ISSA/INTERCLEAN Show in Orlando. With so many activities each day, there was truly something of interest for everyone, regardless of their specialty. ISSA management staff has done an excellent job of continuing to build the ISSA/INTERCLEAN North America Show into the industry wide event of the year.
The International Executive Housekeepers Association International (IEHA), The Building Services Contractors Association International (BSCAI), Association of Residential Cleaning Specialists International (ARCSI), International Facilities Management Association (IFMA), and other groups all came together in Orlando to share, learn and move the industry forward to greater levels of cooperation and professionalism.
Next year in Las Vegas, I expect we will see even more groups holding their annual meetings, gatherings and conventions in conjunction with the ISSA/INTERCLEAN Show.
Even the weather cooperated this year with temperatures in the 80s every day. My only regret was that I didn’t get outside of the conventions centre to enjoy the sunshine before returning to an overcast and rainy Seattle.
Trade Show Exhibits
The crowds were good, especially for the first day and a half, after that, traffic on the show floor did slow down a little. Most exhibitors that I talked to seemed pleased with the number and quality of the visitors on the show floor. Considering the costs involved, every exhibitor would like to see more visitors attend the show. With continued efforts on the part of the ISSA, along with some new approaches, I believe it is possible to make the North American Show the most widely attended cleaning show in the world.
The show is evolving from one of sales people, distributors and manufacturers to one of end users, specifically cleaning contractors and facilities managers. This was easy to see in the faces of visitors, attendees were younger and more women are attending the show.
I didn’t get to wander the show floor as much as I would have liked to. Although each show is always more of the same, I was able to find many new and interesting products in both established company booths and those of first time exhibitors.
Here’s a review of several new products that caught my interest on the show floor

Square Scrub: Chemical and Solution Free Stripping/scrubbing. www.squarescrub.com
Traction-Pak: Anti-slip floor treatment in easy to use dissolvable packets. www.pakit.com
KrudKutter: Oil Stain Remover for concrete. www.krudkutter.com
Clean Card Pro: Fast, easy and Inexpensive system to test for surface contamination. No expensive, complicated equipment or swabs needed.  www.oriondiagnositica.com
Taski Swingo 150E: 13” Micro-Auto Scrubber. www.diversey.com
EcoPrep Maroon Pad: Chemical Free Finish Removal, works with any machine. www.americomfg.com
Activeion: Sprayer converts tap water into dirt removing, germ killing cleaning agent with no chemicals. www.activeion.com
OxiSeal: A Floor Sealer/polish containing potassium silicate and titanium dioxide. Works on any kind of floor covering and requires no stripping, burnishing or refinishing.  www.simixsolutions.com
Education Abounds
Seminars, workshops, and presentations have become a staple at the ISSA/INTERCLEAN Show, regardless of your specialty or interest there was always some educational event going on somewhere that you didn’t want to miss. From keynote speakers, to seminar leaders and the ISSA Education Theatre or the Green Connections Center, it was often difficult to decide on which program to attend. I was involved in several presentations at the Green Connections Center and was impressed at the number of attendees who showed up to listen and participate in discussions related to Green Floor Care, Inspecting a Restroom and Train the Trainer techniques.
Good Food
There were several sponsored lunches and breakfasts as well as dinners and parties to attend. Even exhibitors booths and the deli carts offered a wide choice of tasty treats for the hungry and those looking for a place to rest their feet or voices.
Spartan, Georgia Pacific and many others had great evening parties where attendees ate, danced and talk the night away.
Hot Topics
Green and Sustainable issues were ever present, but not as dominate as in recent years. The ISSA’s Cleaning Industry Management Standard (CIMS) got top billing, with a lot of coverage and interest by attendees. As a CIMS and CIMS-GB Assessor and Consultant, I have to say that CIMS is one of best programs I’ve ever seen rolled out by an industry association. It’s an everybody wins program that has the potential to help transform the cleaning industry in positive way.
Karaoke – Belting It Out with Style
A report on this year’s ISSA/INTERCLEN Show would not be complete without a mention of the ISSA Cocktail Party and Karaoke event. If you missed this event, you missed one of high lights of the show; the only problem was that it was far too short.
Hat’s off to all who braved the stage to belt out their favourite songs to the music of a live band and the cheers of a roaring crowd. I’d give almost anything to see and hear again that one girl belting it out with heart and soul. It brings tears to eyes’ just thinking about it. If you were there, you know what I mean. If not, you missed the highlight of the show; this event was worth the price of admission. These could have been educational clips that would have gone viral. Did anybody tape this event?
Don’t miss Las Vegas in 2011
Don’t miss out on all the fun and what’s new at next year’s ISSA/INTERCLEAN North American Show in Las Vegas, on 18 to 21 October 18 2011. Las Vegas is always the best attended show in the series of locations (Chicago, Orlando and Las Vegas).
Three other cleaning industry trade shows that cutting edge professionals shouldn’t miss include:
1. Pulire Show, Verona Italy, 24 to 26 May 2011. This is the international Floor Care Equipment Show. This is where manufacturers go to see the future of Floor Care Equipment. What you see here, is what you’ll see in North America in three to five years.
www.pulire-it.com/2011
2.  Connections Carpet Cleaning and Restoration Show, Las Vegas, NV. 7 to 9 September 2011. This is the best specialty show in the world for carpet, rug, and upholstery and fire, water and odour damage restoration specialists.
www.connectionsconvention.org/cnx_con_ts.html
3. ISSA/INTERCLEAN Amsterdam, 8 to 11 May 2012. The largest cleaning related trade show in the world. www.issa.com
*Bill Griffin is president Cleaning Consultant Services, Inc
www.cleaningconsultants.com